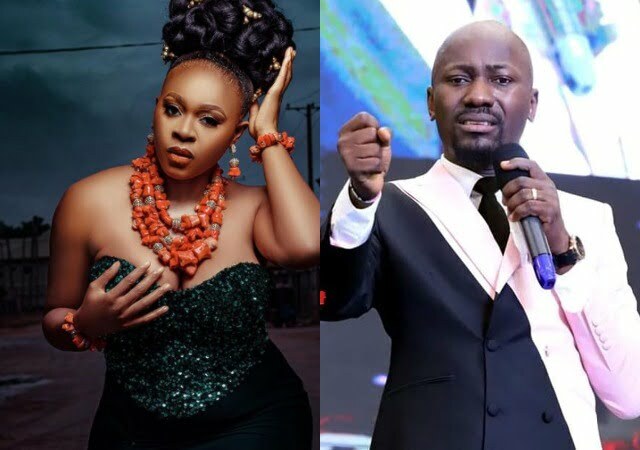 Chioma noted that she revealed her relationship with the cleric to help her renew her walk with Christ and help her be a better person in Christ Jesus.

The actress during an interview with Daily Sun further stated that she is not expected to protect an oppressor.

Chioma said, “I did it (confessed) because of my repentance, my walk with Christ, my new life, and my resolution to be a better person in Christ Jesus. Secondly, I’m an activist and I work with the community.

“How do you think people will see me if I ignore it? How do you think that would make me look? What would be the reason for being quiet about such a thing that I know about this man, even when it affects me directly?

“So, it didn’t come out of a desire to destroy anybody, it came out as a warning to people who feel that when they do things, it’s concealed and they become so big and that people are not going to be courageous enough to come out and say the truth.

“I have no iota of regret, not even one. In fact, I feel so great. A lot of great things have been happening to me from the day I made that confession. It’s been a life-changing experience. So, why should I regret it? I did it because of my God and service to humanity. It cost me a lot, but it’s always at a cost that something new and good would happen. It’s always at a cost, a very sacrificial cost. So, yes, I did it, and I’m proud of it. I own it and I don’t regret it.”

Chioma added that as at the time she had intercourse with the cleric she had no idea that he was a prominent person.

She noted that her first meeting with the cleric was arraigned by a lady identified as Linda Clems, while the second time, it was through the phone because they had exchanged numbers after the first intercourse.

The actress while speaking on what she has gone through after the incident said, “Life has been great. Even though, in the first few days after the confession that went viral, the backlash kind of affected my mental health. But because I’m this kind of person who looks on to God and not man, I’ve always been very attached to God, so it wasn’t difficult for me to find my feet spiritually, mentally and physically.

“Yes, things were tough for some days but over time, I had to deal with the situation in my head. And as the days went by, I was motivated and became stronger.”

Chioma while speaking on her reception by her colleagues in the movie industry, said, “I am not holding anything against them. People have their personal beliefs, faiths, decisions and characters because we came from different homes and areas of life. People know what they know. People are people, so I don’t blame them.

“That’s how they felt and it’s their way of expressing what they felt. I didn’t even expect it because when you expect something, you could get disappointed. I knew that I was not going to get support from Nollywood and that if I did, it’s going to be very few people who are going to say, ‘Oh… I know Chioma, she did this and I think it’s worth it.

“But I wasn’t surprised at all and I don’t hold anything against anybody, nothing! I totally understand their position and like I told one of them, ‘what I did was bigger than anybody, and anyone who feels bad about it, I’ll let them. But with time everyone will understand.’”

Chioma while answering questions on whether she had plans to extort the cleric said, “That’s laughable. The people who know me know that money does not freak me. What freaks me is character. Money and power do not move me. I need money but money is not everything. There’s a way I see life and there are things I value more than money. Extort who?

“How much is he going to give me? Do you know the guilt I carried all these years for something that I did? I knew that I did it out of desperation; I did it because I wasn’t acting right. So, fast-forward to today, I’m dealing with the guilt and I come out to spill it and people say I want to extort the person? I don’t know how it works but even if they bring one billion dollars, I can’t be moved.

“We must always think beyond that. The day the world was created, the day everything you see was put together, money was not in the concept. Man conceptualised money and so, why would I want to do anything of that magnitude because of money? No, that’s totally wrong.

“I never did it to extort money from anybody; it’s just for my faith. So, children of God, I did it for my society and that’s what will matter for decades; for centuries, that’s what will count, not money.

“I can give the money back to him, to his (church) members or to the society, but I need to be sure that it’s the right thing to do. So, that’s not a big deal. If that will help for the evil done, the evil of adultery with a man of God, if that is going to help for God to have mercy, why not? I’ll gladly do it.”

On the reaction of her fiancé to her confession, she noted, “My fiancé was quite supportive because he was the first person I confessed to; I told him everything and many more.

“He’s been in the picture even before I got baptized, he knows my spiritual life; he knows my relationship with God. So, when it was time, I told him. I said, ‘this is what happened and I’m sorry. If you don’t want to continue the relationship, that’s okay and he said ‘no, I love that you are bold enough to tell me this. I want you to make it public, I can’t keep it down anymore.

“And I said, ‘Fine if that’s what’s going to help you, then who am I not to do it?’ So, my fiancé was very supportive, and thanks to him that I pulled through strongly. However, my family was tough, the calls and questions like ‘how can you do this?’ came up; everyone was angry. But I thank God for our spiritual leader who told them that it was good that I confessed. He said it might not be good for man but it’s good for God as He approves of it.”