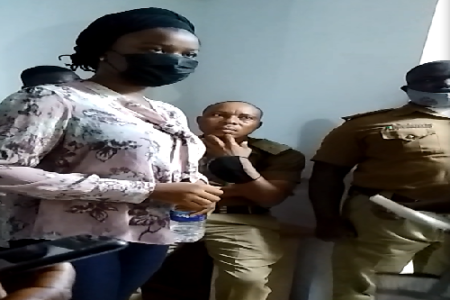 The suspected killer of the CEO of Super TV, Usifo Ataga, Chidinma Ojukwu, has arrived in the Lagos State High Court, for trial.

The state government on Tuesday arraigned Chidinma and others over the alleged murder of the Ataga.

The 300-level Mass Communication student of the University of Lagos, is being arraigned before Justice Yetunde Adesanya of the Lagos High Court.

Recall that the trial of the suspect was transferred to the High Court for its continuation.

Naija News reports the decision of the lower court is based on legal advice from the Lagos State Directorate of Public Prosecutions (DPP).

Also, based on the legal advice issued by DPP Director, Mrs Olayinka Adeyemi, 11 suspects were cleared of complicity in the murder of the Super TV boss while Chidinma and two others are to be tried in a high court.

Others set for trial alongside Chidinma include her sister, Egbuchu Chioma and one Adedapo Quadri.