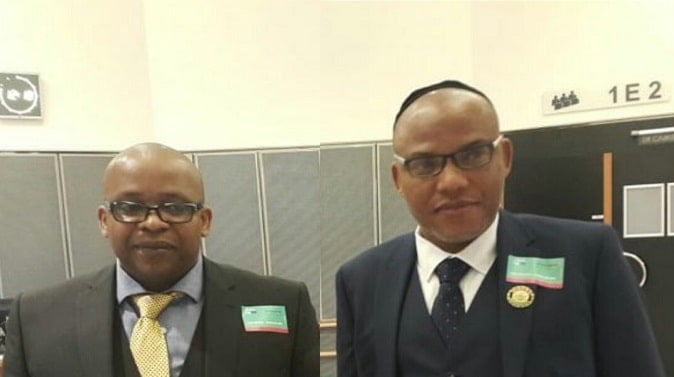 The former Deputy Leader of the Indigenous People of Biafra (IPOB), Nnamdi Kanu, has accused the outlawed group of being behind the killing of Dr. Chike Akunyili in Anambra State.

It was gathered that Dr Akunyili had earlier visited the University of Nigeria Nsukka Alumni Association (UNAA) for an event before he was murdered.

Reacting in a post on his Facebook page on Thursday, Mefor accused the Nnamdi Kanu-led IPOB of not continuing with the idea behind its set-up.

He accused the pro-Biafra group of carrying out crime against humanity in the guise of freedom fighting.

“If other parts of Nigeria are imploding, those who know better must insulate, maintain civility and not allow our land to also assume the status of lawlessness and of barbarism. But what an irony in the face of the unfolding, avoidable situation today!

“We have said and would emphatically continue to say that: abomination remains abomination. What the Indigenous People of Nnamdi Kanu (IPONK) is doing of late is criminality, it is a category of heinous crime called CRIMES AGAINST HUMANITY WITHIN THE ROME STATUTE AND THE JURISDICTION OF THE INTERNATIONAL CRIMINAL COURT, ICC ; AND NO MORE FREEDOM FIGHTING.

“It is on record that on the inspiration of the violent utterances ,threats and incitements to horror by Nnamdi Kanu and his bumbling sycophantic criminal gang members of the not-fit-for-purpose DOS, a series of sponsored and blanket assassination/killing campaigns and extra-judicial extermination of the innocent unsuspecting Igbo Biafrans have been commissioned and ridiculously on an ongoing basis—–hailed and celebrated by a cross-section of the gullible as UNKNOWNGUNMEN/ESN, as fighting the fulani herdsmen and in the name of freedom fighting.

“The latest is the unfortunate assassination of Dr. Akunyili.

“Shamelessly, the South East governors, the clergy, community leaders and opinion molders have not done enough to call these criminals by their names and as such maintained a highly disturbing ‘criminal silence”; and rightly so because official silence in the face of criminality by leaders amount to tacit support or complicity. The ones who attempted to speak have failed to call a spade a spade. But you know what? Like we warned since December 2020 of the danger of leaving weapons of warfare in the hands and control of unregulated non-state actors with reference to Kanu’s intentions with his misguided, ill-advised and not-well-intended security outfit, ESN, that it would led to proliferation of armed militia groups, anarchy/lawlessness and our society becoming a gun-running one, consequences of this singular failure by the political class in Biafraland is now an obvious serious error of judgement and as such an ill wind that will definitely ruffle everyone in an unintended fashion.

“There is no way that the human rights compliant Biafra we are seeking would be restored through acts of criminality. We reject armed struggle outside legitimate self-defence, strict adherence to the dictates of international human rights law, justice and accountability in the pursuit of Biafra’s rights to self-determination.”