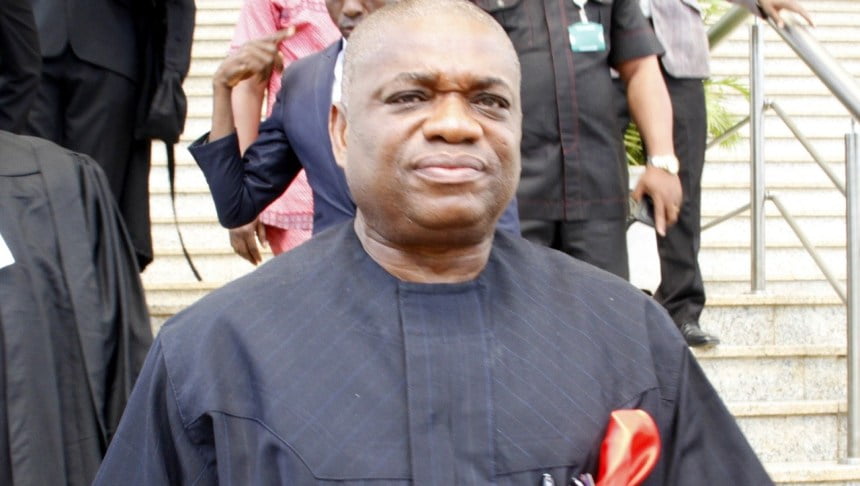 The Federal Government has been restricted from retrying the former Governor of Abia State and Senate Chief Whip, Orji Uzor Kalu.

Naija News reports that Justice Inyang Ekwo of the Federal High Court sitting in Abuja gave the judgement on Wednesday.

The presiding judge asked the Economic and Financial Crimes Commission, EFCC, to stop the planned retrial of Kalu based on the N7.1billion money laundering charge earlier preferred against him.

The presiding judge ruled that the apex court only ordered the retrial of former Director of Finance in Abia State, Jones Udeogu, who was the Appellant before it.

Consequently, the judge upheld a suit Kalu filed to challenge the legal propriety of his planned re-arraignment by the EFCC.

Recall that Kalu had in the application he filed through his team of lawyers led by Chief Awa Kalu, SAN, argued that allowing the EFCC to try him afresh on the charge and same facts upon which he was earlier convicted and sentenced on December 5, 2019, would occasion him to suffer a “double jeopardy”.

Giving reasons why his retrial should not commence, Kalu, said he was convicted and sentenced by Justice Mohammed Idris of the Federal High Court in Lagos with respect to the extant charge against him.

He noted that the Supreme Court had in the judgement it delivered on May 8, 2020, on Appeal No: SC.62C/2019, which was filed by his co-Defendant, Udeogu, held that the trial of the Appellant at the trial Court was conducted without jurisdiction.

The former governor argued that the apex court thereafter, only ordered the retrial of the Appellant (Udeogu), without reference to himself (Kalu).

Consequently, Kalu prayed the court for an order of perpetual injunction restraining FG, through the EFCC or its agents, from further trying, harassing, and intimidating him with respect to the charge or any other charge based on the same facts “as the Applicant need not suffer double jeopardy”.