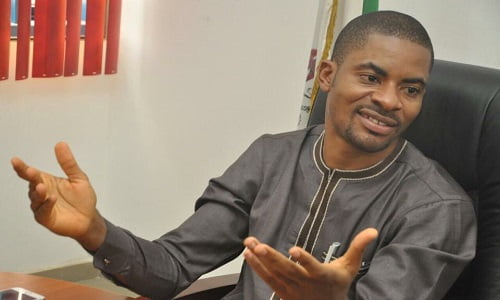 Popular activist, Deji Adeyanju, has slammed President Muhammadu Buhari over the appointment of Senator Ifeanyi Ararume as the chairman of the Board, Nigerian National Petroleum Company Limited.

In a statement made available to newsmen by his Special Adviser on Media and Publicity, Mr Femi Adesina, the President approved also the appointment of the Board and Management of the NNPC Limited.

Naija News reports that each of the six geo-political zones in the country also has a representative on the board and all the appointments take effect from the date of the company’s incorporation.

Reacting to the development in a post on Wednesday, Adeyanju described Ararume’s appointment as a travesty.

The Convener of Concerned Nigerians said he believes the All Progressive Congress has more qualified and experienced people in the oil and gas industry who could have been given the appointment.

Adeyanju pointed out that Ararume is inexperienced in the industry dealings and hence not fit for the appointment.

He noted his only major achievements are being a Senator and managing a supermarket.

“The All Progressives Congress, APC we believe has more qualified technocrats and well-experienced players in the oil and gas industry as members that could have been appointed as the chairman of Board of the country’s mainstay source of revenue,” Adeyanju noted.

He added: “Nigeria’s oil and gas sector represents about 65% of government revenues and such sensitive sector ought to be superintended by a competent person who has the requisite knowledge and experience of the industry instead of appointing Ararume whose only major achievement is being a Senator and managing a supermarket.

“Ordinarily, after the incorporation of the Nigerian National Petroleum Company Limited as a business entity, one would have thought that the president would appoint a business-oriented technocrat with vast knowledge in oil and gas to pilot the affairs of the company but alas, the rudderless government of President Muhammadu Buhari’s led Federal government opted for a politician with zero experience in oil and gas industry.

“The appointment of Ararume whom former president Olusegun Obasanjo in 2011 described as the “Big Thief” has brought to the fore, President Muhammadu Buhari’s penchant for outlandish and unconventional methods of appointing cronies and men of questionable characters.

“We call on the President to as a matter of urgency, reverse the appointment of Senator Ararume as chairman of Board, Nigerian National Petroleum Company Limited as it goes against reason and logic,” he added.