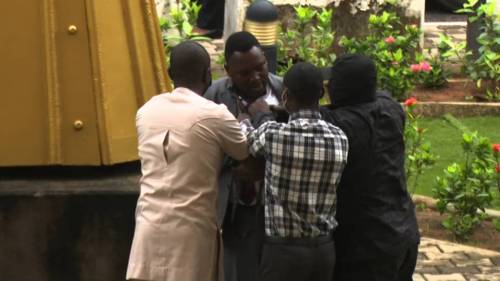 Naija News gathered that the secret police officers attacked journalists and other press crew at the Federal High Court, Abuja.

A photojournalist with Vanguard, Gbenga Olamikan was manhandled on the court premises while covering the arrival of the agitators.

The armed DSS operatives pounced on him, seized his mobile phone and forced him at gunpoint to delete all the pictures he took.

It took the intervention of his colleagues who insisted that his phone must be returned.

The situation led to heated arguments as journalists insisted that security operatives cannot stop them from carrying out their duties.

Also, the operatives in an attempt to prevent other journalists from filming the Yoruba Nation agitators cordoned off the courtroom and denied journalists access.