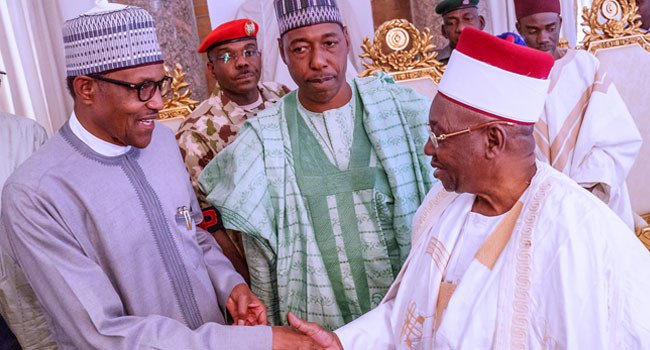 There is jubilation currently in Maiduguri as President Muhammadu Buhari alongside the service chiefs arrived the Borno State capital amidst tight security.

The President who arrived via the Air Force based in Maiduguri around 10.10am was received by the state Governor Babagana Zulum and members f the state council.

The Nigerian leader is expected to visit the Palace of the Shehu of Borno, meet with troops of Operation Hadin Kai, and commission over 10,000 Housing units constructed for Internally Displaced Persons (IDPs).

During the visit, the president is expected to launch some projects provided by the state government.

He will also inaugurate the first phase of 10,000 houses to be built by his government to resettle refugees displaced by Boko Haram.

Naija News understands that security has been beefed up around the access route the President will pass during his visit to the state.