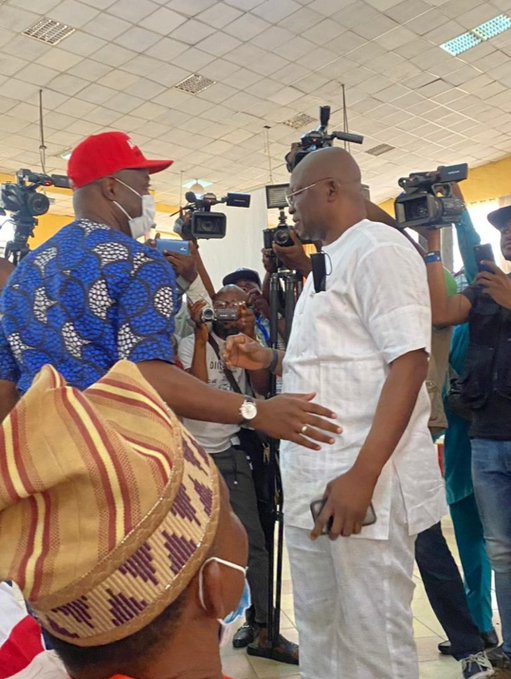 Former Governor of Ekiti State Ayodele Fayose has acknowledged Governor Seyi Makinde of Oyo State as the leader of the Peoples Democratic Party (PDP) in the SouthWest.

He made the surprise acknowledgment at the ongoing zonal congress taking place in Osogbo, capital of Osun on Monday.

Naija News reports that the South West PDP has been embroiled in crisis, leading to the delay in holding the zonal congress to elect zonal leaders of the party.

However, the congress was finally scheduled to hold on Monday, April 12, 2021, in Osogbo, after the date, and the venue was shifted.

However, there was tension at the Women and Children Development Initiative Foundation (WOCDIF), Osogbo, when the zonal congress kicked off on Monday.

Taofeek Arapaja, a former deputy governor of Oyo, and Eddy Olafeso, the immediate zonal chairman of the party, are contesting for the chairmanship position of the zone.

While Fayose is rooting for Olafeso, Makinde has pitched his tent with Arapaja.

When he addressed the delegates, Fayose said no matter the situation, Makinde is “our leader”, promising to accept the outcome in good faith.

“Under this gathering, you are our father,” Fayose told Makinde.

This elicited loud applause among the delegates and party supporters in the hall.

Reacting, Makinde in his speech said he will accept the outcome of the congress, saying that there will be no winner and loser in the election.

He said: “I will accept the outcome of the congress. And there will be no winner and loser in the election. It is a family affair. Good development.”