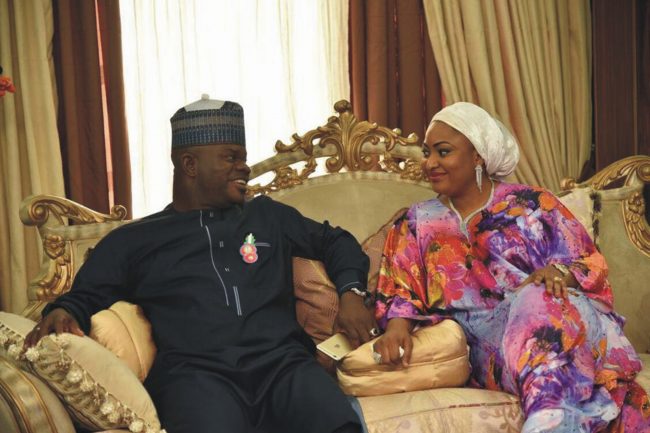 The Kogi State government has declared that all is well between the state governor, Yahaya Bello, and his wife, the first lady, Rashida Bello.

The reaction on Monday by the government follows earlier reports in some quarters that the first lady has moved out of the government house following disagreements with the Governor.

But reacting to the reports, Onogwu Muhammed, the Chief Press Secretary to the governor, said in a statement on Monday that there was no truth in the report, describing the allegation as the handiwork of mischievous elements.

He added that all is well between the governor and his wife as Bello is in full control of his house.

The statement reads: “Our attention has been drawn to an online publication titled ‘Trouble in Kogi State as the First Lady, Rashida Bello, allegedly moves out of government house’.

“For lack of formidable tool of distractions, the online medium struggling hard for traffic has come out with a concocted falsehood alleging a crack in the household of Gov. Yahaya Bello.

“The said publication laced with lies and crooked fallacy detailed how the First Lady, Hajia Rashida Bello, has moved out of the Government House in what the merchants of mischief painted as a revolt against the governor.

“This reaction is coming out not in reverence of the amorphous medium but a call to the general public to disregard as tissue of lie the malicious fabrication.”

He added that, “Bello is in full control of his household, the same way he holds in firm grip the affairs of the state.”

Mohammed urged members of the public and particularly the people of Kogi State to disregard the publication.

This development was announced by the Iyatsere of Warri kingdom and Acting Chairman Warri council of Chiefs and Olu Advisory council, Chief Johnson Amatserunreleghe.

This was done after Amatserunreleghe had earlier in the day, announced the passage of its monarch His Royal Majesty, Ogiame Ikenwoli at Ode Itsekiri, Warri South local government area, Delta State.

As a mark of respect for the departed monarch, there will be no merrymaking in the oil city of Warri for the next three months.

Also, all forms of merrymaking including burials, marriages, dancing have been suspended across all Itsekiri communities for the next three months.

Similarly, all Itsekiri sons and daughters must tie their wrappers upsidedown for the duration of the mourning.