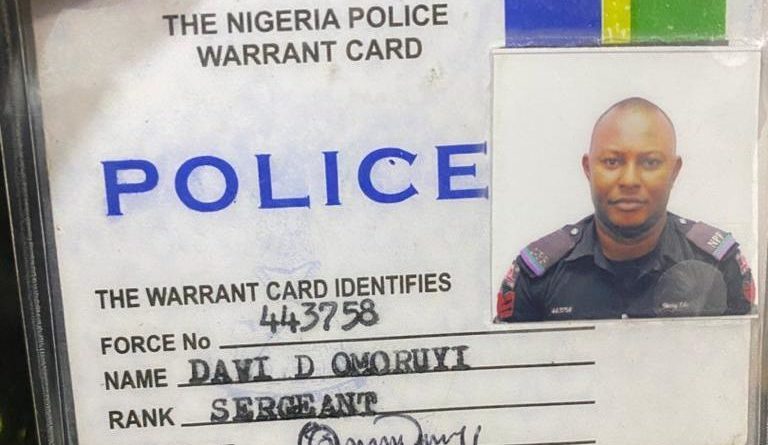 A man parading himself as a police officer has been arrested by Lagos State Police Command, Naija News reports.

A report on Sunday by the command through its spokesperson, CSP Muyiwa Adejobi, revealed the arrest of one David Omoruyi, in possession 30kg packs of suspected Indian hemp.

Naija News understands that the suspect was nabbed with a fake police identity card at No 4, Job Street, Afromedia, Otta-Awori LCDA, Lagos during the weekend.

The police mouthpiece while giving details of Omoruyi’s arrest, said he was cornered by a team of police officers at Alaba Rago Market in Ojo while carrying on his head some bags of the weed in the company of his fleeing accomplices.

Confessing to the force when interrogated, Omoruyi said he was parading as a fake policeman to gain easy access of drugs.

”David Omoruyi claimed he is a serving sergeant attached to Mopol 49, Epe, Lagos State. But after we interrogated him, he confessed to be a fake policeman,” Adejobi revealed.

He added that “The suspect confessed that he used to flash the fake ID to gain access and for easy passage of their loots or drugs whenever they are on business.

On his part, the Commissioner of Police, Lagos State, CP Hakeem Odumosu ordered that the suspects be transferred to the State Criminal Investigation Department, Panti, Yaba for discreet Investigation, while their fleeing members be searched for and brought to book with immediate effect.

Meanwhile, a coalition of Yoruba youths, which has its name as the Lanlate Renaissance, has alleged that no fewer than 10 persons have been murdered by Fulani herdsmen in the Ibarapa area of Oyo State in the last two years, Naija News reports.