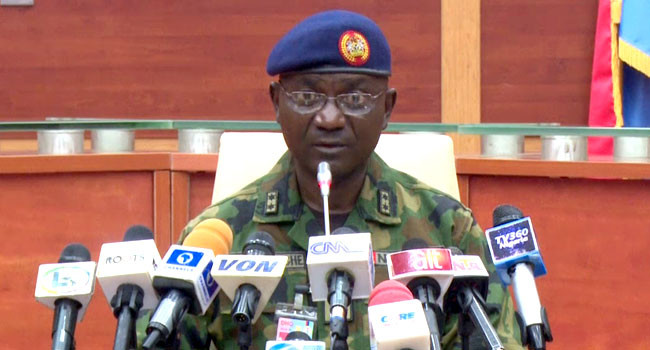 The Defence Headquarters (DHQ) has said Boko Haram insurgents have been decimated in the Northeast part of the country.

In an interview with NAN on Monday, Coordinator of Defence Media Operations, John Enenche, said the Nigerian military has also checkmated the operations of the terrorists in the troubled region.

He noted that the federal government and the Armed Forces defeated the insurgents in the Northeast and across the country in 2015.

Enenche said the initial delay in tackling the menace made the insurgents take over territories and set up administrative structures before they were finally defeated in 2016.

He said the open display of power and authority by Boko Haram no longer happens in the north-east, and that no single district or community could be said to be under the control of the insurgents.

The army spokesman, however, urged Nigerians to provide information on the activities of the insurgents to enable the military to capture them.

He said: “The issue of bombings that even spread to other places like Abuja, Kano, Niger and Kogi States, including their slipper cells no longer exist.

“What about suicide bombing, which is one of the signs of terrorism? It was rife and even at our checkpoints they come and detonate bombs as well as public gatherings; all these have been nipped properly.

“If you put all these together, I can tell you that terrorism has been checkmated.

“However, the signs are still there with isolated action here and there; common with terrorism.”