The lawyer and agent of Argentina legend, Diego Maradona, Matias Moral, has called for an investigation into his death.

Moral alleged that ambulances took more than half an hour to arrive at Maradona’s house on Wednesday, after he suffered cardiac arrest.

Recall that Maradona died of a heart attack on Wednesday at age 60.

The football legend died at his private house outside Buenos Aires and six ambulances reportedly responded to his residence.

Morla, however, stated that all the ambulances reported late at the residence of the deceased.

Maradona’s lawyer who post on Twitter in Spanish described the delay of the ambulance as a “criminal idiocy” .

The Argentine was staying at his house weeks after undergoing brain surgery. 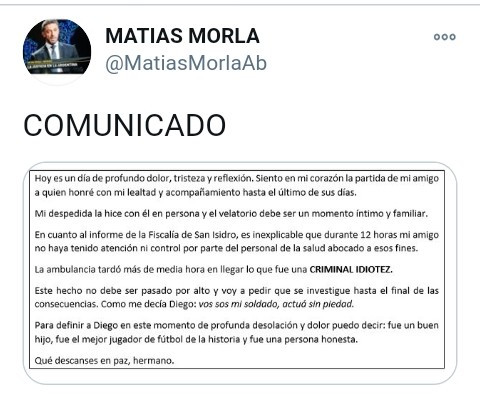