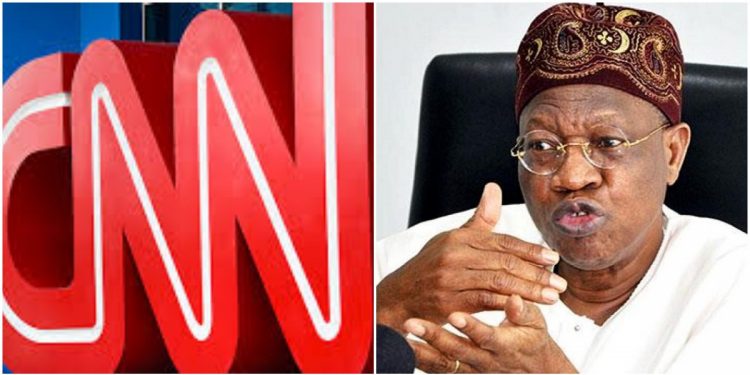 Lai Mohammed, the Minister of Information and Culture, has said the Cable News Network (CNN) is grasping at straws in desperation, to justify its inaccurate and unbalanced investigation into the shooting of EndSARS protesters in Lekki.

Naija News recalls that CNN on Thursday explained its post on Twitter on October 23, 2020, which reported that “at least 38 people were killed” when soldiers opened fire on peaceful #EndSARS protesters in Lekki, Lagos.

CNN in a tweet two days after the shooting in Lekki also claimed that at least 56 people died across the country since the protest commenced as of October 22.

But in another tweet on Thursday, November 26, CNN clarified that its October 23 tweet did not attribute the death toll to Amnesty International.

It also said the tweet did not explicitly said those killed were as a result of the #EndSARS protests.

Speaking on Friday at a stakeholder’ meeting with the Broadcasting Organizations of Nigeria (BON) held in Abuja, Lai Mohammed vowed not to spare CNN or any other media organization for carrying out unverified information from the controversial Lekki Toll Gate incident.

He said the US-based media outfit was spreading fake news about the Lekki shooting to set Nigeria on fire.

The Minister pointed out that the use of unverified videos, and the non-adherence to the basic tenets of journalism have combined to land the international broadcaster, CNN, in trouble”.

Lai Mohammed said: “It is baffling that an organization like CNN will rely on unauthenticated videos to carry out an investigation

“More worrisome is that an international broadcaster like CNN will switch casualty figures so casually without a credible source. This is why we have written a letter to CNN asking it to use its own internal mechanism to probe its investigation.

“We have received an acknowledgment of our letter, saying the letter has been referred to CNN’s Editorial Team. We await the outcome of their probe, but that’s without prejudice to whatever we may decide to do as a government.

“We will not sit by and allow any news organization, local or foreign, to set Nigeria on fire with irresponsible and unprofessional reporting.

“CNN did not have a reporter or cameraman at the Lekki Toll Gate on the night in question, yet it emphatically reported a hoax story. Conversely, the BBC that had a reporter and an editor on ground reported that soldiers shot into the air, not at protesters. I will rather believe the person on the ground than the one who is thousands of kilometres away.

“Since we sent our letter, CNN has been grasping at straws in desperation, to justify its inaccurate and unbalanced investigation. But in the process, it is sinking more and more into professional infamy.

“Yesterday, Nov. 26th that is, in the clearest indication yet of the its confusion over the Lekki Toll Gate incident, CNN tried to clarify its tweet of Oct. 23rd by saying it never attributed the death toll of 38 to Amnesty International and that the tweet also did not make it clear that the death toll was for protests across the country.

“Commentators on the tweet tried to redirect CNN to the issue: which is its tweet of Oct. 23rd in which it said ”At least 38 people were killed in Nigeria on Tuesday (Oct. 20th) when the military opened fire on peaceful protesters.”

“This is very unambiguous and CNN is exhibiting panic by seeking to clarify its tweet some 35 days later! Instead of engaging in such panic, CNN should come clean by admitting that it goofed badly on the Lekki Toll Gate incident.

“But the big lesson to draw from CNN’s faux pas is that it magnifies the failure or inadequacy of our own broadcast organizations.

“In the wake of our spat with CNN, people are asking: Why didn’t our own broadcast stations take the lead in reporting the incident at Lekki? Why didn’t they take the lead in presenting an authentic narrative? Why must we allow the foreign broadcast stations, some of which didn’t even have correspondents on ground, to dictate the pace, thus misleading the world? These are questions begging for answers and I think for BON, this must form part of their review of the coverage of the incident.”