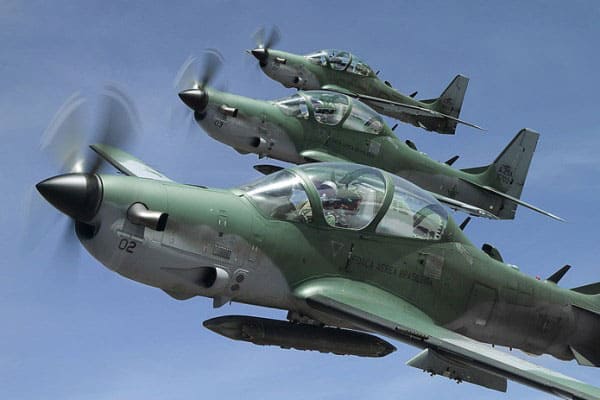 The Chief of Air Staff, Air Marshal Sadique Abubakar has revealed that the Nigerian Airforce (NAF) is set to take delivery of 19 additional aircraft in the fight against Boko Haram and other insurgents.

This was disclosed on Tuesday by the air chief when he appeared before the Senate Committee on Air Force to defend their 2021 budget figures.

He gave the breakdown to be three J-17 fighters from Pakistan, 12 super Tucano United States, one M-171, and three special mission aircraft from the NIMASA.

In his words: “We are expecting three J-17 fighters from Pakistan, 12 super Tucano United States, one M-171 and three special mission aircraft from the NIMASA

“We are talking of about 19 additional aircraft.”

The CAS added that 200 NAF personnel were receiving training in nine different countries while NAF had also trained 119 pilots from Liberia Air Force in support of the West African military.

These pilots are expected to soon join their colleagues in the fight against insecurity while more training to improve efficiency of operations are planned.

Commenting, the chairman of the committee, Senator Bala Ibn N’Allah commended NAF and the CAS for doing so much with little resources despite all the challenges.

He also spoke on the readiness of his committee to visit some of the troubled areas for on-the-spot assessments.

He said, “The committee is willing and ready for two on-the-spot visits to the theatre (of terrorism) maybe Maiduguri and elsewhere so that we can register formally our appreciation to the efforts of the Air Force to the challenges of insecurity.”