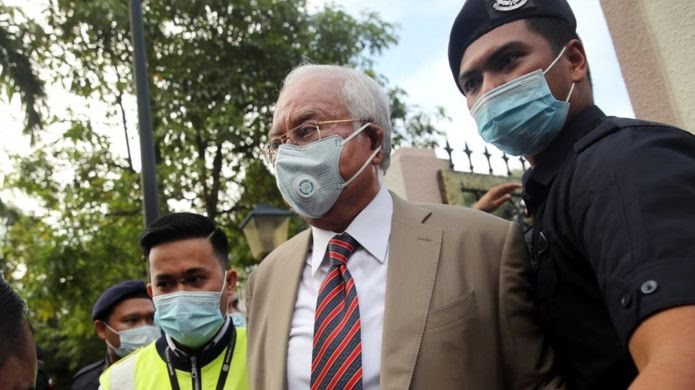 The former Prime Minister of Malaysia, Najib Razak, has been sentenced by a court in the country to twelve years in jail after finding him guilty on all seven counts in the first of several multi-million dollar corruption trials.

During proceedings on Tuesday, the former PM had pleaded not guilty to the charges of criminal breach of trust, money laundering and abuse of power.

The 1MDB scandal around a state-owned wealth fund in Malaysia has uncovered a global web of fraud and corruption.

It sent shockwaves through Malaysia’s political establishment, leading to the toppling of Najib’s UMNO party, which had governed the country for 61 years since it gained independence.

Najib who ruled for 9 years was sentenced to 12 years in prison for abuse of power, and 10 years in jail for each of six counts of money laundering and breach of trust.

The sentences are to run concurrently while pending appeal will be suspended.

“After considering all evidence in this trial, I find that the prosecution has successfully proven its case beyond a reasonable doubt,” judge Mohamad Nazlan Mohamad Ghazali told the Kuala Lumpur High Court.

“I am surely not satisfied with the result,” Najib told reporters.

“This is definitely not the end of the world, because there’s a process of appeal, and we hope that we would be successful then,” he added.