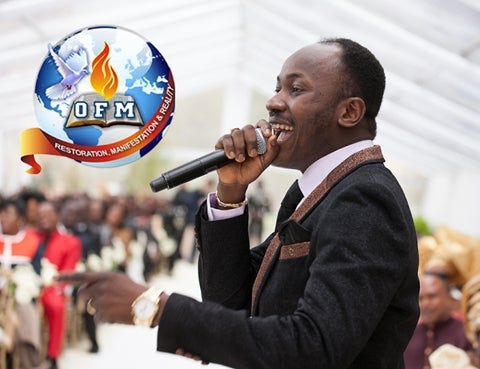 The General Overseer of Omega Fire Ministries (OFM), Apostle Johnson Suleman, says before the end of this year, heaven will send a major helper to people.

Naija News reports that the OFM General Overseer made this proclamation on the micro-blogging site, Twitter.

Apostle Suleman tweeted: “Don’t worry, before the end of this year heaven will send you a major helper…”

Dont worry,before the end of this year heaven will send you a major helper…

In a related development, Apostle Suleman has released “powerful” prophecies for the month of June 2020.

The OFM General Overseer released the 2020 May prophecies on the micro-blogging site, Twitter, on Monday morning, June 1, 2020.

Stressing the importance of the scripture, Apostle Suleman quoted Proverbs 25: 25 and prayed that those that believe in the prophecies, for the fact that “this new week heralds a new month, so shall it bring double blessings” for them.

The OFM General Overseer who has been tagged as “controversial” in some quarters, prayed in his prophecies that “heaven shall give you a silent connection to a loud contact.”

In the prophecies for June, Apostle Suleman prayed that the month of June that “what has not been done in your family shall happen through you” for those that believe in the prophecies.