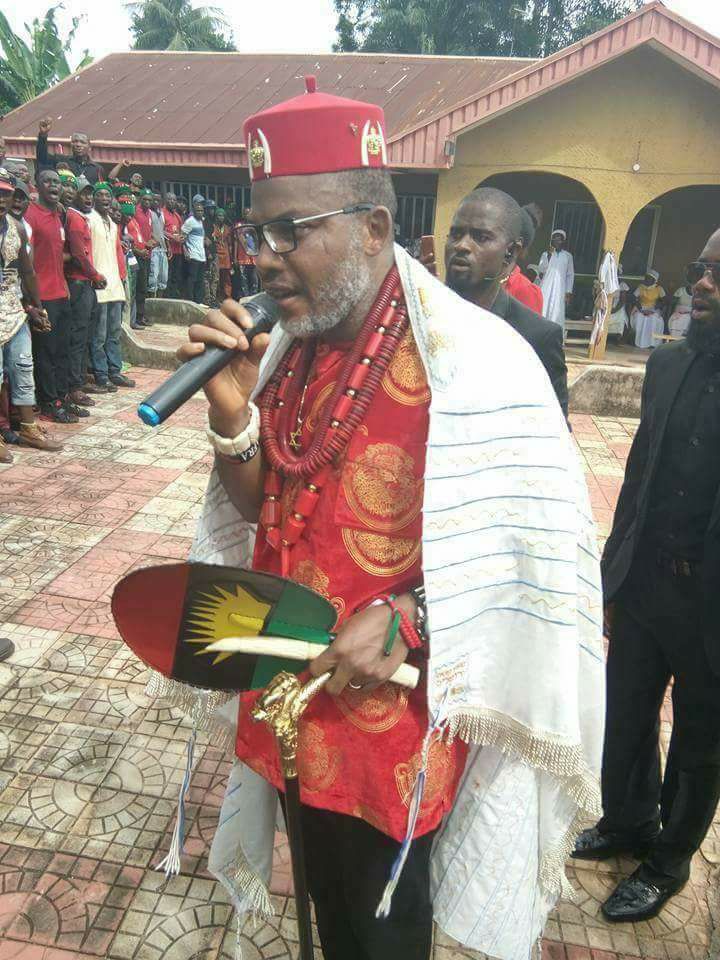 The leader of the Indigenous People of Biafra (IPOB), Nnamdi Kanu, has addressed “Biafrans“, expressing gratitude to his supporters for the successful burial of his parents, Eze Israel Okwu Kanu and his wife, which took place in Isiama Afaraukwu community in Umuahia North LGA of Abia State

Naija News reports that ahead of the burial ceremony, Kanu threatened to kill the children of the Chief of Army Staff, Tukur Buratai and that of the Commissioner of Police in Abia State,  Ene Okon, if any IPOB member is injured or killed during the burial ceremony of his parents.

This online news platform recalls that before Kanu disappeared from Nigeria sometime in September 2017, he was being prosecuted on charges bordering on treasonable felony instituted against him as a response to his agitation on the IPOB platform for the secession of an independent Republic of Biafra from Nigeria.

Ahead of his parents’ burial ceremony, Kanu had vowed to return to Nigeria, where he said he would kill the children of Buratai and thereafter submit himself for arrest if any member of his group is injured or killed on February 14 during the burial ceremony in his father’s compound but the IPOB leader failed to attend the burial over what many described as the fear of been rearrested by the Nigerian authorities.

Kanu who addressed members of the proscribed group on Friday night, said IPOB is the only movement that marches and the foundations of hell tremble, adding that even Satan is afraid of the group which was proscribed by the Federal Government led by President Muhammadu Buhari.

His words: “The best of the very best, The chosen children of the Most High. The hardest core of them all The most unique and formidable assembly of men, women and children on this earth

“The only movement that march and the foundations of hell tremble; even Satan is afraid of IPOB “With my parents out of the way, very soon we shall march and the Sun will not set on that glorious day until the vandals are vanquished and the tricolour of the rising sun raised never to be lowered again.

“I thank this great family of IPOB all over the world for the love you showed my parents, who are resting in the bosom of the Most High. From the bottom of my heart I thank all those that put the enemies to shame today, but above all I thank Almighty God Chukwu Okeke Abiama pure ime ihe nile for his infinite grace upon our lives.
“IPOB! One Family,” the IPOB leader said.