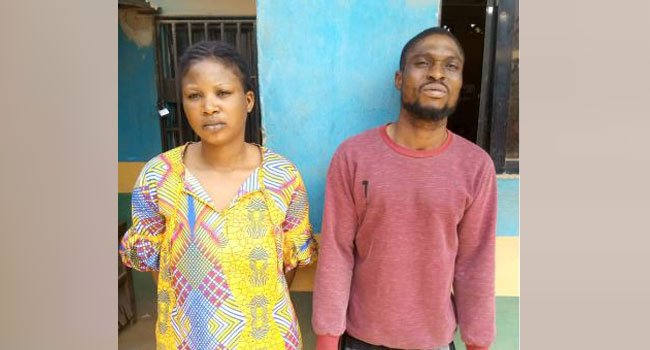 Shukurat Olufowobi a resident of the Oshodi Oke area of Ogijo, Ogun State has mistakenly killed  his stepson Azeem Olufowobi

Naija News learnt that the suspect, Shukurat was arrested alongside her husband, Ayuba Olufowobi, following a report received at Ogijo Divisional headquarters.

It was gathered that some residents of the area had informed the police that the victim died following an injury he sustained in his head having been allegedly beaten with an object by the prime suspect.

A statement issued by the Police Spokesperson, Abimbola Oyeyemi, on Sunday, alleged that the woman and her husband “hurriedly took the corpse of the victim to Ajah in LagosState where he was secretly buried.”

Preliminary investigation revealed that the woman had been maltreating the victim, whose mother separated from the father due to irreconcilable differences.

On a fateful day, the boy was beaten on the head with a heavy object which caused him a broken skull resulting in his eventual death.

The nurse who gave the victim first aid treatment and informed the couple of her observation was asked by the woman and her friend to lie about the cause of the victim’s death but she refused because it is against the ethics of her profession.

Meanwhile, the Commissioner of Police, Kenneth Ebrimson, has ordered the immediate transfer of the suspects to the homicide section of the state criminal investigation and intelligence department for further investigation and prosecution.