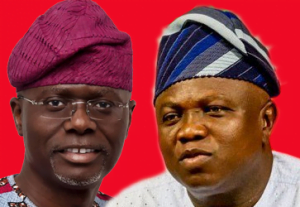 The governor of Lagos State, Babajide Sanwo-Olu, has called on Lagosians to pray for the former governor of the state, Akinwunmi Ambode as the latter continues his journey out of office.

Naija News reports that Governor Sanwo-Olu made the call t the 2020 Annual Thanksgiving service put together by the first family which held at Lagos House, Alausa, Ikeja on Sunday, January 5.

This online news platform understands that the theme for the service was: ‘Offering Glorifies God’ taken from the book of Psalms 50:23.

Meanwhile, the yearly event is held to give praises and commit the administration of Lagos State into the hands of God in the New Year.

Sanwo-Olu replaced Ambode as the Governor of Lagos State after the ruling All Progressives Congress (APC) refused to give the former governor a second term ticket.