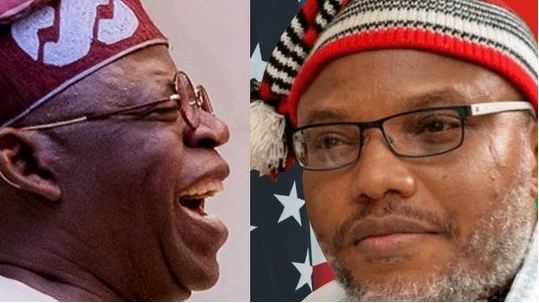 The leader of the Indigenous People of Biafra (IPOB), Nnamdi Kanu, says Bola Tinubu’s reign as a leader in Yoruba land is over because Omoyele Sowore, the convener of #RevolutionNow Movement, is now the new Yoruba leader.

Sowore’s release followed a court ruling ordering DSS to release him in the next 24 hours.

Apparently displeased with Sowore’s travails, Kanu held a live broadcast, where he condemned the act and also called for his release.

During the broadcast, Kanu who described Sowore as the “new face of Yoruba liberation”, stressed that anytime the activist steps out of prison, he would be the next face of Yoruba land.

The IPOB leader maintained that Sowore will come out of DSS custody and that he would lead his people to freedom, adding that the activist should rather channel his energy towards getting Oduduwa republic rather than fighting for “one Nigeria” as “Nigeria is useless.”

His words: “Let me tell Tinubu this, your reign as the leader of the Yoruba people is finished, Sowore is the new face of Yoruba liberation.

“Sowore is the new Yoruba leader. Any day Sowore steps out of prison, he would be the next face of Yoruba land.

“Sowore will come out and he would lead his people to freedom. Sowore should go and fight for Oduduwa, Nigeria is useless,” Kanu said in a broadcast monitored by this reporter.