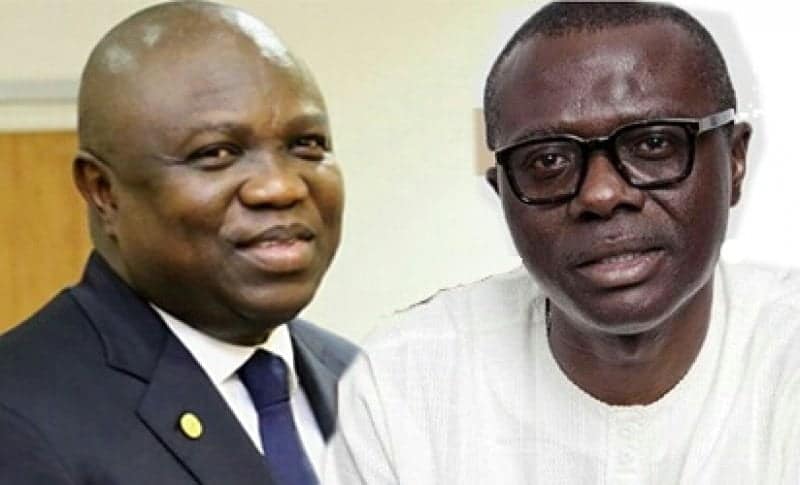 Its been almost eight months since Gov. Babajide Sanwo-Olu was sworn into power in Lagos after he defeated other gubernatorial candidates, including Mr Jimi Agbaje of the People’s Democratic Party(PDP).

Before the election, Sanwo-Olu had become the flagbearer of the party, All Progressive Congress(APC), after he defeated the then Incumbent governor, Akinwunmi Ambode at the party’s primaries.

However, about eight months after he began to rule, Nigerians have taken to twitter to do a comparison between Governor Sanwo-Olu and his immediate past predecessor, Ambode

I knew there is Big problem the day i saw this Sanwo-olu iron his jeans trouser and put gators on it.#Ambode said it o? pic.twitter.com/ejUF0fwur9

Meanwhile the way things are going…

Lagos citizens will block road and protest soon.@jidesanwoolu has to come out

So Dangote is behind the Oshodi – Mile 2 road construction??
and in turn, he is tax-free for the next 5years
??

⚽OUR TODAY EARLY KICK OFF IS HERE AGAIN ??, DON'T MISS OUT ⚽

IF YOU ARE INTERESTED AND READY TO MAKE PAYMENT FOR OUR FIRST GAME.

EARLY GAME IS OUT AGAIN. HURRY UP AND PURCHASE NOW BEFORE ITS TOO LATE

When Jimi Agbaje was shouting it , we thought he was mad now see ! #ambode https://t.co/TQgmEzE2a1

Who can help with all those sanwoolu campaign again pls?#ambode
The campaign was powerful.
Second term will be mad..@Gidi_Traffic

A friend of mine who lives in Lagos said the governor has suddenly disappeared. I don't blame Sanwo-Olu, the man cannot come and kee himsef. #Ambode that almost killed himsef ontop of Lagos work, wetin him gain las las?

#Ambode doesn’t deserve an apology, we should be ashamed of ourselves that we continue giving power to same folks and expect something different! https://t.co/u5ZJNZ6ij1

Tinubu loyalists will forever make media presentation of how bad #ambode was just to justify his replacement because landlord Tinubu wanted it so.
Lagosians felt real changes under the government of ogbeni Akinwunmi Ambode.

Four months gone and lagosians are already realising that Ambode did great in Lagos, I think Babajide Sanwo-Olu is way too silent for a governor of lagos. Well, let's fold our arms and wait, we never might know#lagos #ambode

Abeg does anyone still have the clip of the world (ranting) press conference @AkinwunmiAmbode had before the primary elections? I want to check something ?#Ambode #Sanwoolu #Lagos