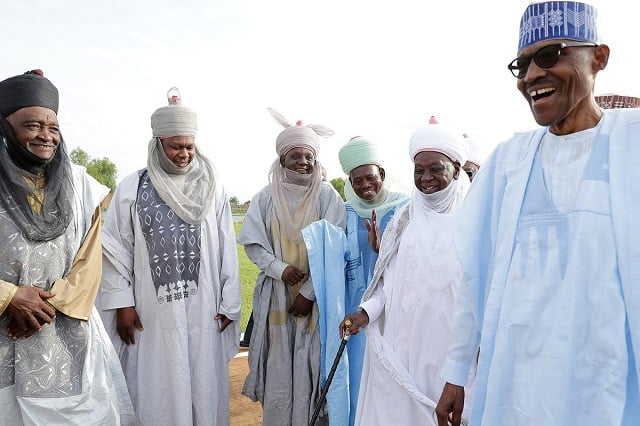 Batsari is one of the eight front line Local Government Areas disturbed by the activities of banditry and kidnapping in Katsina state.

The governor in his address said the recent deployment of additional security personnel and equipment to this area has led to a drastic reduction in the frequency of attacks.

He, however, admitted that there are still incidents of attacks, kidnap and cattle rustling in the area.

He added that the state government with the help of other security agencies has been able to scale down these atrocities owing to its dialogue and amnesty program.

Speaking further  President Buhari said people killing others while shouting “Allahu Akbar” are wicked and are not Muslims.

According to him, ‘’All those whose activities is to kill people and saying “Allahu Akbar” are lying because God is not wicked. You can’t carry bomb or gun, sword or knife to go and kill innocent somebody and say “Allahu Akbar”. This implies that you either don’t believe in God or you don’t know what you are saying.

“There is a popular Hausa adage which says it’s the rat in the house that tells the rat outside that there is fish in the house, so within yourselves, your neighbours and even your relatives there are informants.”

“I am here to sympathize with the entire people of the state over the unfortunate incidents that have been claiming lives of innocent people,” he said.

The president said that the bandits that have been killing people should not claim to be true Muslims.

“Islam did not give individuals the right to kill others without following due process in the court of law.

“The Federal and states government will do everything possible to eradicate all forms of insecurity in the nation as soldiers and police have been given all the necessary support by the government.

“We are doing our best to checkmate the activities of armed bandits and insurgents in the country.”