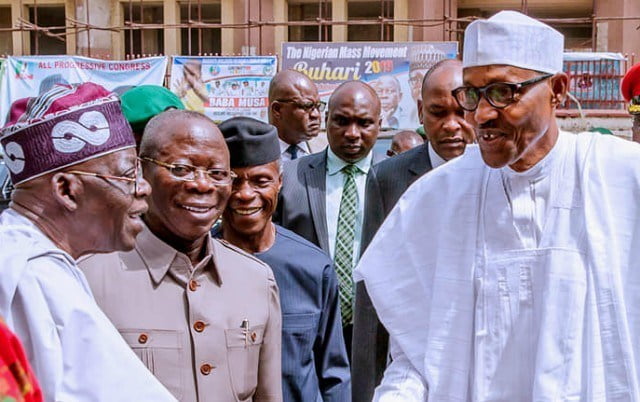 According to Vanguard, the three men are working with the president to appoint people who would deliver in their respective portfolios.

A source, however, disclosed that the three APC leaders are working separately and not as a team.

It was also learnt that President Buhari is willing to appoint competent individuals in the private sector and not just members of the All Progressives Congress (APC).

One of the sources said the trio has identified some party members among who are the Managing Director of Nigerian Ports Authority, Hadiza Bala-Usman, immediate past Minister of Transport, Mr Rotimi Amaechi, former Minister of Power, Works and Housing, Babatunde Raji Fashola, ex-Minister of Aviation, Hadi Sirika, among others.

“President Muhammadu Buhari is considering merit this time because he wants results from his ministers.

“That was why he is listening to the Vice President, APC party chairman, and Governor Nasir El-Rufai to assist in choosing competent hands among party members and from the private sector.

“He does not want noise makers but those who can do the job. The Managing Director of NPA, Hadiza Bala-Usman and Rotimi Amaechi may make the list because they possess the qualities needed. Another person is Fashola,” the source said.

Naija News understands that section 147(1-3) directs Buhari to appoint at least 36 ministers unless the constitution is amended.

The section reads: “There shall be such offices of Ministers of the Government of the Federation as may be established by the President.

“Any appointment to the office of Minister of the Government of the Federation shall, if the nomination of any person to such office is confirmed by the Senate, be made by the President.

“Any appointment under subsection (2) of this section by the President shall be in conformity with the provisions of section 14(3) of this Constitution:

“Provided that in giving effect to the Provisions aforesaid the President shall appoint at least one Minister from each state, who shall be an indigene of such state.”