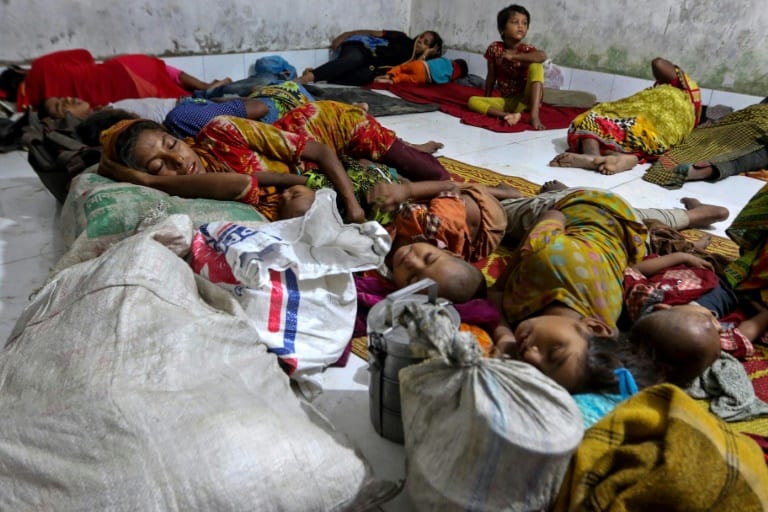 Almost 800,000 people in eastern India have been evacuated from their homes, located where a major cyclone packing winds up to 200 kilometres (125 miles) per hour and torrential rains is likely to hit, officials said today.

Naija News had yesterday reported how the Indian authorities ordered the evacuation of thousands of people from coastal districts likely to bear the brunt of the storm.

The Indian weather service said Extremely Severe Cyclonic Storm Fani was expected to make landfall on Friday afternoon in Odisha state and barrel northeastwards on a pathway close to the homes of more than 100 million people.

A state relief department official told Nigeria News that 780,000 people were moved to safer places overnight from at least 13 districts of Odisha, home to some 46 million people, which will bear the brunt of the weather system.

“We are expecting more than a million people to move out of the danger zone in next 12 hours,” Bishnupada Sethi, Odisha Special Relief Commissioner, told Nigeria News.

Some 3,000 shelters in schools and government buildings have been set up to accommodate more than a million people. More than 100,000 dry food packets are ready to be dropped if needed, reports said.

On Thursday the storm, which reports said was the biggest to hit eastern India in nearly two decades, was brewing in the Bay of Bengal some 250 kilometres (155 miles) offshore and moving slowly but ominously westwards.

The cyclone was expected to pack sustained wind speeds of 180-190 kph, bringing gusts of up to 200 kph, equivalent in strength to a Category 3 to 4 hurricane.

It was expected to make landfall near the Hindu holy town of Puri, a major tourist hotspot attracting millions of Indian and foreign visitors every year.

More than 100 trains have been cancelled in past 48 hours, according to a statement by Indian Railways. Three special trains were running from Puri to evacuate pilgrims and tourists.

Authorities have asked tourists to leave coastal areas and avoid unnecessary travel. Special buses have been deployed in Puri and other towns.

Dozens of officials were making announcements on hand-held megaphones across the coastal belt asking residents to leave their homes for safety.

Recall that the Indian Navy has also been put on alert.

The Airports Authority of India issued an advisory to all the coastal airports to take adequate precautions.

“Our men are urging people to move to safer places and government has set up sufficient shelters to take in those evacuating their homes,” said Sethi.

“Heavy rains are expected in all the coastal districts amid fears of flash floods. We are all geared up for the challenge.”