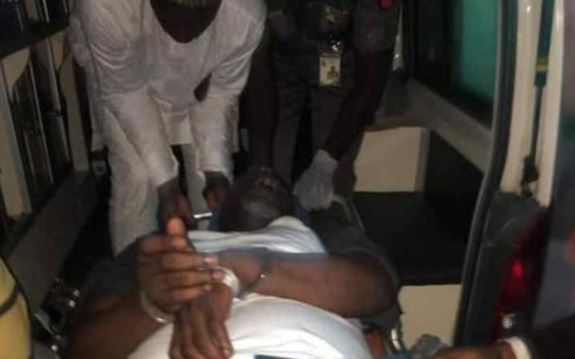 A 37-year-old man identified as Segun Obasanjo has been arrested alongside five others for allegedly selling Indian hemp in a market.

Naija News understands that the operatives of the Lagos state police command, the Okoko Police Division on Saturday made the arrest during a raid of Alaba Rago Market.

The police spokesman, Bala Elkana made this known in a statement obtained by Naija News on Sunday.

He states that the suspects were openly selling Indian hemp.

Besides the suspects, Elkana says six others were held for alleged cultism at about 10:30 am by policemen attached to Area ‘J’ Command in connection with a clash that left four persons dead at Ajah, Lagos, on April 14.

In his words, Elkana says; “Babatunde Wasiu, 30, Bolaji Elijah, 25, Joseph Timothy, 32, Bolaji Olayiwola, 22, Saheed Lateef, 22, and Julius Augele, 20, were arrested in connection with a clash between Eiye and Aiye cults on April 14, at General Paint, Ajah.

“The clash left four Aye cultists dead. Axes and jack knives, which they used during the clash, were recovered from them. Four suspects were earlier arrested and charged to court in connection with the incident, bringing the number of suspects arrested to 10.

“The Homicide Section of the State Criminal Investigation and Intelligence Department (SCIID), Panti, Yaba, Lagos is investigating the case and the suspects will be arraigned.”