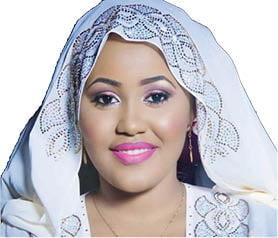 Kannywood star Amina Abdullahi is dragging an icon in the industry, Hadiza Gabon to court over an alleged attempt by the later to damage her reputation.

Adbullahi disclosed this to Daily Trust in an exclusive interview at the weekend while reacting to the viral video showing Hadiza Gabon assaulting her.
“I have met some lawyers and they have agreed to stand with me to fight for my right,” she said.

“My prayer is to redeem my image in society.

With what happened, a lot of people now see me in a negative light, even when it was a planned assault on my personality and reputation. From that clip, you could see physical and reputational assault, so my prayer is just to restore my dignity.”

Narrating what transpired between her and Gabon, Abdullahi said: “What happened was that I posted something on one of my social media handles and I didn’t know that the post angered Hadiza Gabon, whom I regard as a role model. “In the beginning, it was a picture that was not decent so a lot of people were complaining and in the end I included another DM (direct message) and some wordings.

“However, I didn’t know that she was not happy with the post since I didn’t mention anyone’s name in it. That day, I was at home and Habu Sarki, who happens to be one of the people I respect so much in the industry, called me and said he wanted us to have a very important discussion.
“He said he was out of town and would call me when he arrived. When he came back, he called as we earlier discussed and I came out to meet him. As I stepped out of the house, I noticed a black salon car and then I saw Hadiza Gabon coming out of the car. “I didn’t know she came along with some others in a tricycle and immediately she got close to me, she started beating me.

Habu Sarki then said we should get into the house but I was confused because I didn’t know what was actually happening. I opened the door to my house and we all entered and yet she didn’t stop beating me. From the video, you will notice that it all happened in an apartment.

The videos are two; in fact, she beat the hell out of me and seized my phone.”

She said Hadiza Gabon, alongside her driver and other men, also beat her on the following day when she went to her shop to plead with her to return the phone she forcefully collected from her.

According to Daily Trust, She showed the black spots on her face as a prove of the brutal attack she got from Hadiza Gabon