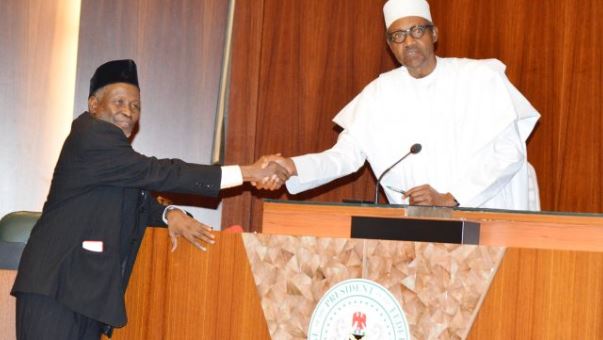 The acting Chief Justice of Nigeria (CJN), Tanko Muhammad has given conditions for his appointments.

Muhammad said President Muhammadu Buhari do not need the permission of the National Judicial Council (NJC) to appoint him.

Naija News reports that Muhammad made the claim in response to a query given to him by the NJC, the only body constitutionally empowered to recommend the appointment of chief justices and heads of courts.

Recall that the NJC had in January issued queries to him and the suspended CJN, Walter Onnoghen.

The queries earlier issued urged Onnoghen to respond to the allegations of corruption levelled against him, while Muhammad was asked to clarify the reason he allowed himself to be sworn in by the president.

The query sought the response of Muhammad for allowing himself to be sworn in by the President without recourse to the NJC.

In his response, Muhammad asserts that Onnoghen remained the substantive CJN, stressing that he was only suspended.

Muhammad furthered in his response to his query that the NJC ought to be consulted only when a substantive CJN is being appointed or re-appointed.

“In my respectful view, the National Judicial Council has no role to play in the appointment of an acting Chief Justice of Nigeria in the first instance, that is to say on first appointment. The council comes in where the appointment as the acting CJN is to be renewed or extended. I humbly refer to Section 231(4) of the 1999 Constitution,” Muhammad said.

“It was for the larger interest of the judiciary and the constitutionality that I accepted to be sworn in as acting CJN with the conviction that if the order of January 23, 2019 is eventually set aside, the status quo would be restored,” he reportedly said.

“But before it is set aside, there should be no vacuum in the office of the CJN and the chairman of the NJC,” he added.