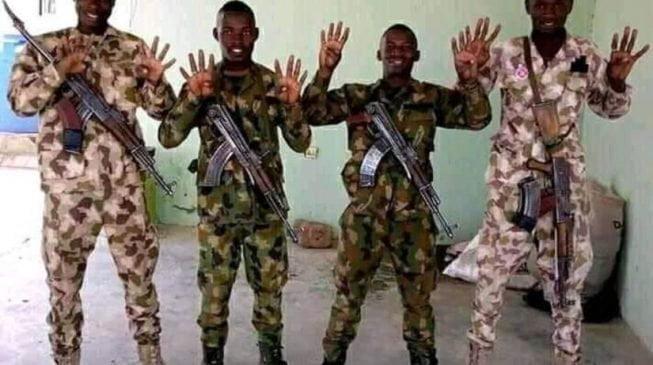 Investigations into pictures of soldiers seen doing the “4 + 4” signal, President Muhammadu Buhari’s campaign signature, has been commenced by the Nigerian Army.

Reacting via a statement, the army said they are already on the matter, trying to verify if the picture is authentic and move to take actions on them.

Sagir Musa, acting director of army public relations, said the act is against the code of conduct of the army.

“The NA wishes to dissociate itself from the picture even as it has commenced an immediate investigation with the view to ascertain the source and authenticity of the pictures and the “soldiers’ involved,” he said.

“If the outcome of the investigation confirms this to be true, appropriate sanctions would be provided. NA of today under the command of Lt Gen Tukur Yusuf Buratai does not condone or encourage indiscipline and any form of professional misconduct.

“On many occasions, the Chief of Army Staff has made it strongly clear that Army personnel will remain neutral, totally apolitical and will not compromise its constitutional roles under any guise.”