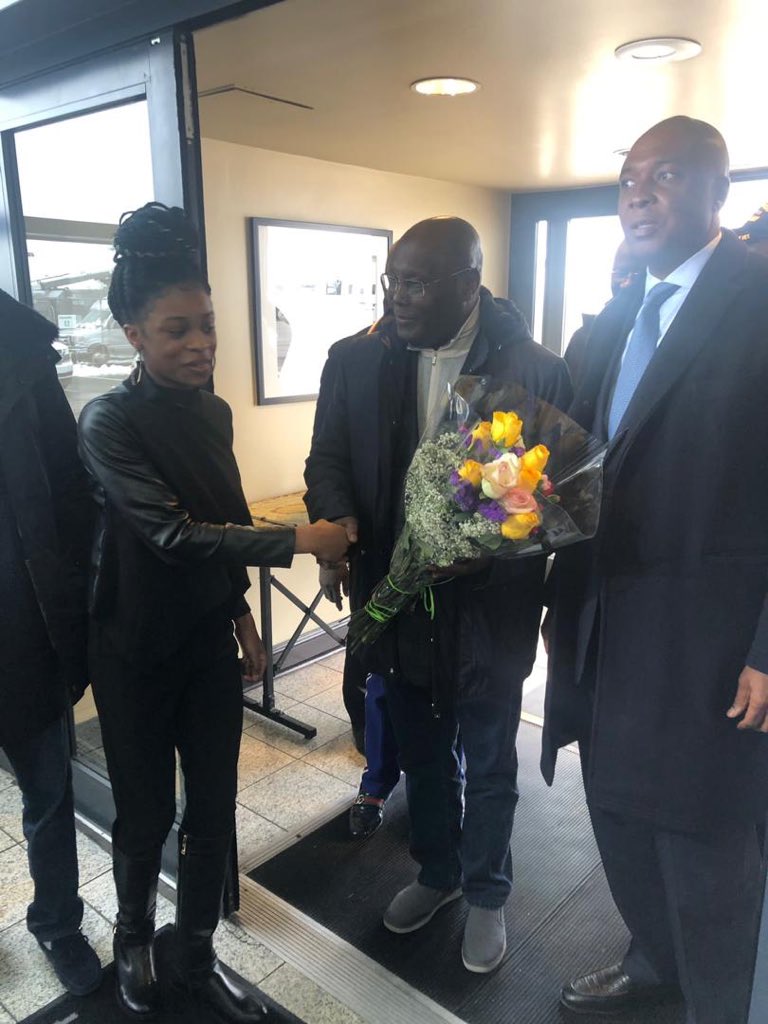 The presidential candidate of the Peoples Democratic Party (PDP), Atiku Abubakar, says his mission in the United States is to create the right economic atmosphere for American investments to return to Nigeria at a rate and quantum that the country had before the “current Nigerian administration’s policies almost halted the flow of Foreign Direct Investments to Nigeria”.

Naija News reports that the PDP Presidential candidate, who visited the United States for the first time in 13 years on Thursday, made this comment in a statement personally signed by him and sent to Naija News.

In the statement, the PDP Presidential candidate said the current Nigerian administration led President Muhammadu Buhari has allowed Nigeria’s relationship with the nation’s “long-standing friends and partners to deteriorate and this has had unfortunate consequences for our economy”.

Abubakar said in the statement that he is in “America because Atiku means jobs”.

It has become pertinent for me to speak about my ongoing visit to the United States of America, where I met and I am still meeting with US administration officials and business leaders.

I travelled to the United States of America because I had a mission and my mission is to create the right economic atmosphere for American investments to return to Nigeria at a rate and quantum that we had before the current Nigerian administration’s policies almost halted the flow of Foreign Direct Investments to Nigeria.

I am in America because Atiku means jobs.

My reason for running for the office of President of Nigeria and even for going into public service in the first place is because I believe that Nigeria has what it takes to be the beacon of hope for the Black Race and a leading nation of reckoning in the international community.

This has not materialised over the course of the last four years because, as Chinua Achebe prophetically said in his 1983 book, “the trouble with Nigeria is the failure of leadership.”

The current Nigerian administration has allowed our relationship with our long-standing friends and partners to deteriorate and this has had unfortunate consequences for our economy.

Foreign relations that had been meticulously and delicately built for decades were allowed to deteriorate because the incumbent administration mistook their personal interests as the interest of Nigeria and allowed short term goals to dominate their foreign policies.

New friendships should not be made at the cost of old friendships. It is not an either-or situation. Right from independence, Nigeria has nurtured a policy of non-alignment. We borrowed from the Lincoln policy of malice toward none and charity for all. Sadly, that policy has suffered major setbacks in the last four years.

As a leader in business, I am cognisant of the fact that both Western and Oriental nations will be making the transition from fossil fuels to electric powered vehicles and other green energies over the course of the next two decades. This means that Nigeria’s oil has a limited shelf life.

To be forewarned is to be forearmed and we must, as a nation, begin to make the transition from an oil economy to a modern economy based on manufacturing and value-added agricultural chain.

The message I took to the United States business community is not a new message. In my opinion editorial in the British media (Beyond Brexit – Nigeria wants a new trade deal with Britain), I opined that Brexit is an opportunity for Nigeria and the United Kingdom to have a Big Ambitious Free Trade Agreement.

It is only common sense.

In 2014, the African continent as a whole earned $2.4 billion from coffee grown in Africa and shipped mainly to Europe. That sounds impressive. However, one nation alone, Germany, made $3.8 billion from re-exporting Africa’s coffee in 2014.

As a businessman, I see this and I cannot allow it to continue. It is unconscionable, but situations like these will not stop unless Nigeria and Africa have leadership that thinks business instead of aid and capital instead of loans.

Nigeria has perhaps the highest populations of youths as a segment of the total population, in the world. Already, we have the unfortunate distinction of being the world headquarters for extreme poverty. We cannot afford business as usual. My single-minded focus is to change this dubious record by transforming Nigeria from a consumer nation to a prosumer nation (a nation that consumes what it produces).

For this to happen, we need US firms who have divested from Nigeria, to return. We need Procter and Gamble to reopen their $300 million Nigerian plant which they shut down last year. We need General Electric to reverse their $2.7 billion pull out of Nigeria.

And my vision is for trade to go both ways. Nigeria has a lot to offer America via her creative industry (Nollywood is the world’s third largest movie industry) and rich mining sectors (Nigeria’s Kaduna state is rich with gold ore). I am also eager to find a market in the US for some of the half a million shoes manufactured in Nigeria’s cities of Kano and Aba every day.

Someone somewhere said Nigeria’s youth are lazy. I am one of the single largest employers of Nigeria’s youth and I know that that assertion is false. My travels in Europe and America is to sell the Nigeria that I know to the world that does not yet know her. A Nigeria with not just a hardworking youthful population, but a nation with some of the smartest working people on earth. A nation that is open for business and a Nigeria that is much more than oil.

And I am certain that if I am successful in selling this Nigeria to the world, the world will come to Nigeria for business. That is why I am in America. Because I believe in JOBS – Jobs, Opportunity, Being United and Security and it is time Nigeria and all Nigerians finally have the opportunity to realize their true potential.