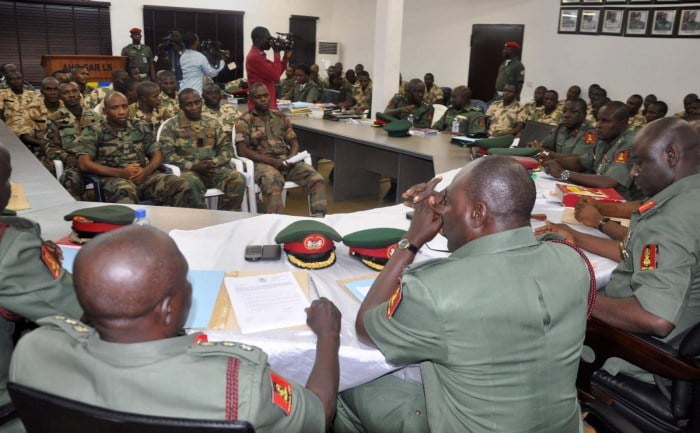 Photo from a previous military court martial used to illustrate the story.

A Nigerian soldier who was allegedly  illegally dismissed two years a ago has informed the National Industrial Court that he wrote to President Muhammadu Buhari about his controversial dismissal, but received no  response from the presidency

Naija News understands that the soldier, Abdulfatah Mohammed, made this known while  responding to questions put forward by Jibrin Okutepa, a senior lawyer representing the Nigerian Army during a cross-examination at the court presided over by a judge, R B Haastrub.

#Nigeria Army illegally dismissed 250 troops among reinstated soldiers for absent on skale parade just for only a day. These is wickedness

Mr Mohammed and 38 other soldiers were dismissed by the army for controversial reasons in 2016.

The officers were neither warned ahead of their sack, nor made to face any panel as required by the Nigerian Army’s guiding rules.

A PREMIUM TIMES investigations later revealed that most of the affected soldiers were sacked for allegedly assisting the opposition Peoples Democratic Party then in government.

Speaking during cross-examination by Mr Okutepa: a Senior Advocate of Nigeria, Mr Mohammed, retired as a lieutenant colonel, refuted claims by the Nigerian Army that he was under obligation to repeat his application after 18 years in the service.

While referring to a letter which contained Mr Mohammed’s posting details after he was commissioned into the military, Mr Okutepa told Mr Mohammed that he was expected to abide by what the lawyer described as the terms of the posting letter and re-submit an application after completing 18 years in the military.

Responding however, Mr Mohammed noted the provisions of the armed forces terms and conditions of service which he described as absolving him (Mohammed) of any such obligations and added that he was not told by the army that the reason for his sack was because he failed to re-apply.

“Instead my retirement letter said I was being retired on disciplinary grounds. I was not given any queries, nor taken before a panel. I learnt about my retirement on the pages of the newspapers,” Mr Mohammed said. “I wrote the President and Commander-In-Chief,” Mr Mohammed added.

He further said that years after writing that letter, he is yet to receive an acknowledgement from the president.

The soldier said he served for over 20 years before he was sacked. He lamented that Mr Buhari failed to address his issue, nearly three years after he communicated the president on his plight.

The dismissed soldier added that he was also denied payment of a three months salary-in-lieu of his retirement, as required by law.

Following their dismissal in 2016, most of the affected soldiers approached the Industrial Court to challenge the decision of their employers.

While some of the cases have attracted positive decisions in court, others have been frustrated by the army who have said the dismissed soldiers were sacked for not renewing their contracts.