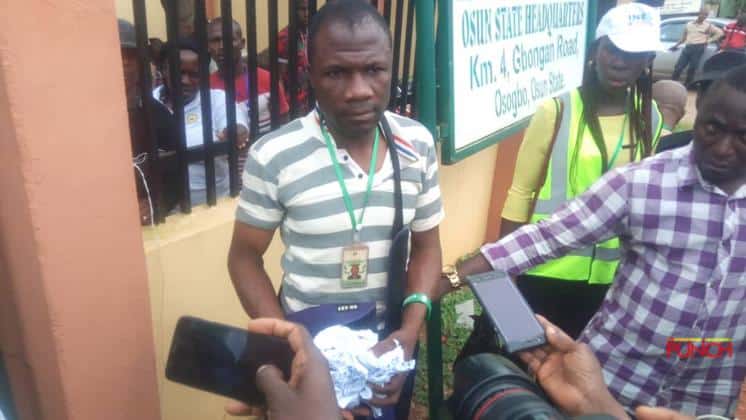 An alleged staff of the Independent National Electoral Commission was arrested by party supporters at Ayedaade Local Government area of  Osun Stare for tearing an INEC result sheets believed to be under contention.

The man, Salawu Mutiu Kolawole, with an INEC identification card, said a superior officer, Mrs Aderinoye, called him and directed him to proceed to St Peter

A Peoples Democratic Party agent had contended that 1000 votes were deducted from the party result in the area earlier during collation of result at the INEC office in Osogbo.

Kolawole said, “An Electoral Officer, Mrs Aderinoye, in Ayedaade council, called me and asked me to go to the council and tear the result sheet.

“Before I could ask her why I had to go and do it, she hung up. I approached another EO, Mr Oladunjoye and told him what my boss said. I went there to tear it but while doing it, two party agents met me there and arrested me.

“They brought me to INEC office after arresting me. I am not a party agent but a staff of INEC. My phone was taken from me by policemen at the gate who ushered me into the premises.”