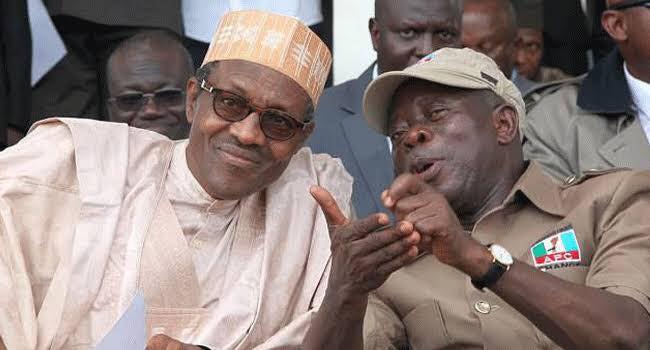 All Progressives Congress Chairman, Comrade  Adams Oshiomhole has said no gang-up can make the President Muhammadu Buhari’s administration waiver from its commitment to rid Nigeria of corruption and improve the quality of lives.

The APC said this in its first official reaction to the signing of a Memorandum of Understanding between the opposition Peoples Democratic Party, the Reformed All Progressives Congress and 36 other political parties, in Abuja, on Monday.

This was contained in a statement signed by the National Publicity Secretary of the APC, Mallam Bolaji Abdullahi, in Abuja, on Tuesday.

Abdullahi explained that the APC had  was not moved by individuals or groups coming together to join or form any association.

He, however, reiterated the party’s position that the R-APC was not a faction of the APC.

The party spokesperson said, “We are confident that no level of gang-up can make our government under President Buhari to waiver in its promises to Nigerians to rid our country of corruption and improve the quality of lives for our people.”

“We respect the right of everyone to join any association or group. However, we wish to reiterate that the so-called R-APC is not a faction of our party.

“It is also noteworthy that some political parties that have been named as signatories to the MOU have disassociated themselves from the publicized deal.

“We once again reiterate the commitment of our party to address real grievances of our genuine members. We call on them to take advantage of this opportunity while the windows for reconciliation are still open.”

However, a former Deputy National Publicity Secretary of the APC, Mr Timi Frank, said the ruling party was now in the minority because a lot of its members had left.