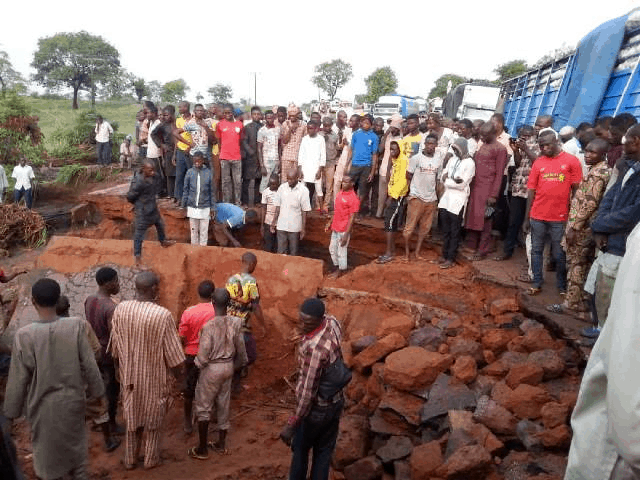 Fashola Visits Emir In Zaria, Assures Mokwa-Jebba Road Will Soon Be Ready For Use

The Minister of Works, Power and Housing, Babatunde Raji Fashola, has said that the collapsed bridge on Mokwa-Jebba road will be back in use within 72 hours.

This was also as the emir the Emir of Zazzau, Shehu Idris, inaugurated a new 60MVA/132/KV transformer to improve electricity supply in the city and its environs.

Fashola who spoke to news men in Zaria, Kaduna State, shortly after he paid homage to the Emir in his palace on Sunday, explained that the ministry had deployed personnel from relevant agencies to provide measures that would ease traffic on the collapsed bridge at Mowo Junction, along Makwa-Jebba road for motorists within the next 72 hours.

The Federal Road Safety Corps (FRSC) had on Sunday morning alerted motorists on the collapse of the bridge after Mowo Junction on the Mokwa-Jebba road, due to heavy rainfall.

The agency had said the bridge, which is 18 kilometres from Mokwa town in Niger State, caved-in, following a downpour which affected vehicular movement from both sides of the road.

The Mokwa-Jebba road is a major transit route for travelers between Abuja and Ilorin.

Mr Fashola attributed the bridge’s collapse to “the hazards that come with weather changes.

“All over the world we see them, mudslide, hurricane, volcano, windstorm, damaging public infrastructure. So, Nigeria is not exempted.

“We know this will cause some discomfort to commuters, for which we apologise for. It is an emergency and we are treating it as such. We are responding.

“A year ago, I think also on the 10th of June, Tatabu bridge also collapsed as a result of rising water level and heavy rainfall and we responded.

Fashola who noted that the FG has been involved in such type of project before, assured “we will do the same thing in Mokwa”

“From our contractors to our staff, we know what to do and by the time I got aware of it early this morning, all our staff had started responding.

“It is very encouraging to me that we have built a team and a system that works.

“We have given instruction to our director in charge of North Central zone to move to the place and work with the controllers in Niger and Kwara states.

“We have also given instruction to the Federal Road Safety Corps, the Corps Marshal is on top of that, helping to manage the traffic on the Federal High way and divert traffic, especially heavy duty trucks carrying fuel, food items to North and South through that road.

“There would be discomfort without a doubt, but we will manage it and make it better day by day and in a couple of days, it should be better,” the minister said .

He said the ministry had also contacted the leadership of oil workers and tanker drivers to explain to their members of what has happened and what the ministry was doing.