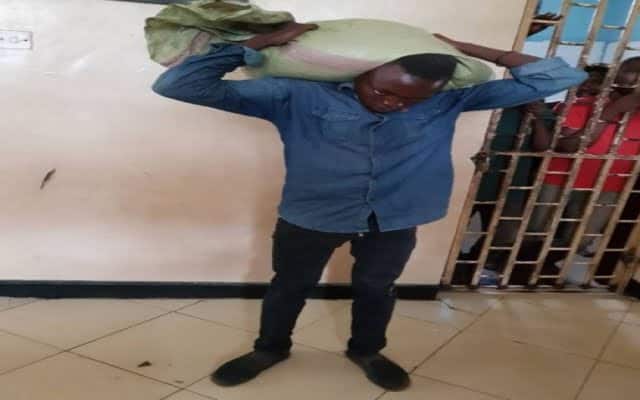 Bag sticks to man’s head after stealing it.

Thief Surrenders To Police After Stolen Bag Sticks To His Head

Mystery hits the environs of Mbezi, an area in Tanzania, as a man, identified as Frank Japhet, who stole a sack of maize was forced to surrender to police after the stolen sack got stuck to his head.

Frank who is 23 years old took a walk himself to the police station after the sack, weighted to be 20 kilogram that he had allegedly stolen from a woman in Nyambwiro area refused to detach itself from him.

He was arrested by the authorities in Tanzania after he had tried numerous methods to get the stuck sack off himself but in vain, Naija News understands.

He was to leave the bag he had stolen at a friend’s place and go to get another one, but this one simply couldn’t ‘let go”, the police said.