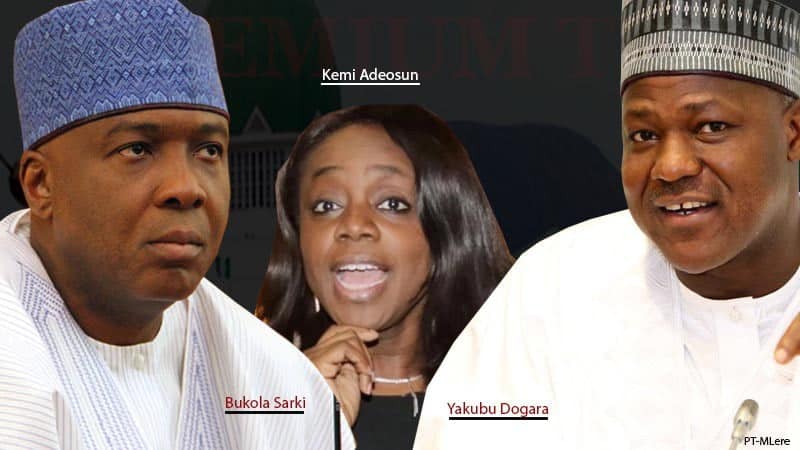 The President of the Senate, Dr. Bukola Saraki, Speaker of the House of Representatives, Yakubu Dogara, and Minister of Finance, Kemi Adeosun, have been allegedly accused of been involved in a fraud scheme running to the tune of N10 billion.

According to Premium Times in an exclusive report, which is focused on Nigeria’s public procurement and budget implementation practices, the N10 billion was illegally withdrawn from the national treasury based on Adeosun’s approval before it was received and shared by Saraki and Dogara.

President Muhammadu Buhari is reported to not have known or approved the payment.

The N10 billion is reported to be part of a secret N50 billion approved for the execution of “constituency projects” which were discreetly inserted into the budgets of several ministries, agencies and parastatals by lawmakers allegedly led by Saraki.

Based on a request by the National Assembly, the sum was allegedly approved by Adeosun in collusion with the Accountant General of the Federation, Ahmed Idris.

The report also noted that at least 44 of the 82 contractors presented for the fraudulent scheme were not registered on the National Database of Contractors, a database of the Bureau of Public Procurement, which makes them ineligible to be awarded federal contracts.

Further investigation also revealed that 17 of the 44 firms were not even registered with the Corporate Affairs Commission, the body charged with the responsibility to regulate the formation and management of companies in Nigeria.

While Premium Times noted that sources confirmed that the contractors were actually awarded jobs, they also indicated that some of them had already been paid while pending payments were already provided for in the federal legislature’s own budget.
This budget, according to the sources, is usually the first-line charge on the federal treasury which already provided for the projects, making the allocation of the extra N10 billion unlawful.

The sources in the National Assembly described the approval of the N10 billion as slush funds for the leadership of the two legislative chambers and top civil servants at the management unit.

A source in the finance ministry challenged Adeosun to explain why the funds were first moved to the National Assembly instead of paying the contractors directly.

“It is a monumental fraud that they are now desperate to cover up,” the anonymous source said.

When Accountant-General Idris was contacted about the report, he explained that the controversial payment was sourced from a N20 billion service-wide vote “provided for local contractors’ liabilities under the 2017 Appropriation for all Ministries, Departments and Agencies and institutions of Government.”

According to experts, despite the appropriation of the N20 billion for payments of local contractors, it was still illegal to pay those hired by the National Assembly from the funds.

The report questioned the decision of the finance ministry to give half of allocations made to pay local contractors to the National Assembly.

The report also revealed that N485 million was released for the construction of model junior secondary schools across Kwara Central senatorial district, a project conceived by Senate President Bukola Saraki.

While N450 million had been approved for the project in the 2017 appropriation law, a further N35 million was released for its execution, a violation of the law.

Saraki and Dogara have both through their spokespersons, declined to comment on the report before it was published on Friday, April 20, 2018.