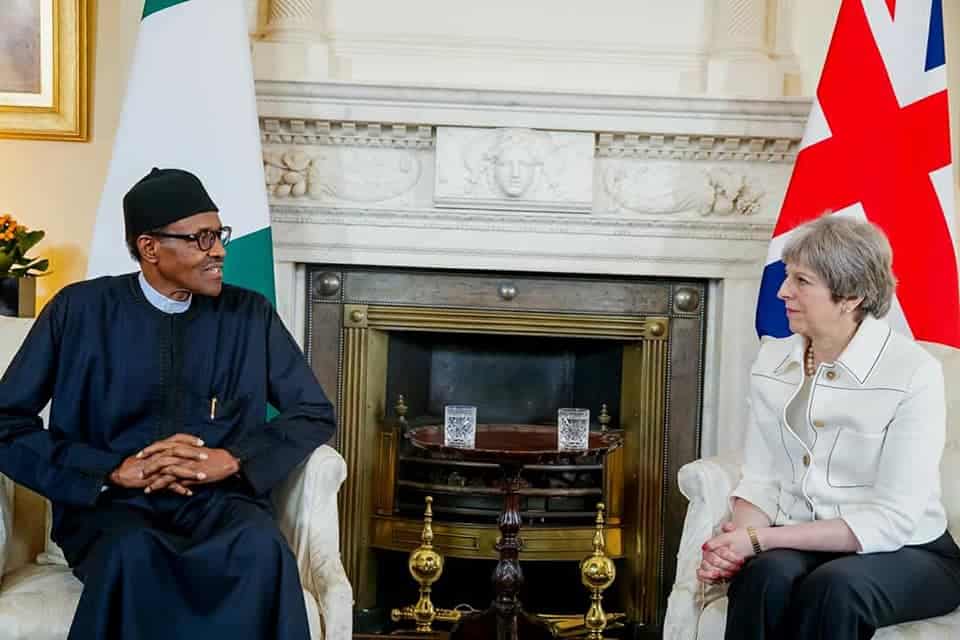 President Muhammadu Buhari has stressed the impart of his government three-pronged focus of the current administration while having a bilateral meeting with British Prime Minister, Theresa May on Monday at 10, Downing Street, London.

In a Press Statement released by the Special Assistant to the President on Media and Publicity, Femi Adesina, the President outlined the major interest of his government and it achievement so far.

The president pointed out that unlike some politicians who are carried aways by the 2019 election, he is bothered by the situation and issues his country is grappling with.

Recalling that Nigeria and Britain have a long history of cooperation on several fronts, President Buhari stated: “People ought to know how they arrived where they are, if they would move forward. It was a mistake for us to have stopped the teaching of history as a subject in schools, but we are returning it to the curriculum now.”

He commend British companies who despite the security situation of the country, even through the Nigeria Civil war stood with the country.

Speaking on his administration’s achievement in the agricultural sector, the President said “I am very pleased with the successes in agriculture,” he said, adding: “We have cut rice importation by about 90%, made lots of savings of foreign exchange, and generated employment. People had rushed to the cities to get oil money, at the expense of farming. But luckily, they are now going back to the farms. Even professionals are going back to the land. We are making steady progress on the road to food security.”

He also brief the English Prime Minister the administration’s effort in the area of education and climate change.

President Buhari brought up the necessity of inter-basin water transfer from Congo Basin to Lake Chad.

According to him: “The Lake Chad is now about 10% of its original size, and it is perhaps one of the reasons our youths dare both the Sahara Desert and the Mediterranean, to get to Europe. But if there is inter-basin water transfer, about 40 million people in Nigeria, Niger, Cameroon, Chad, and other countries stand to benefit. I made the case during the Climate Change Summit in France. If Lake Chad is recharged, it will reduce the number of youths coming to Europe to increase social problems. We brought back about 4,000 people from Libya recently. Almost all of them were below 30, and Libya was not their final destination. They were headed to Europe.”

Prime Minister May, acknowledge the effort of the President and his quest to revive the economic of the country, noted that it was also time to boost intra-Commonwealth trade.