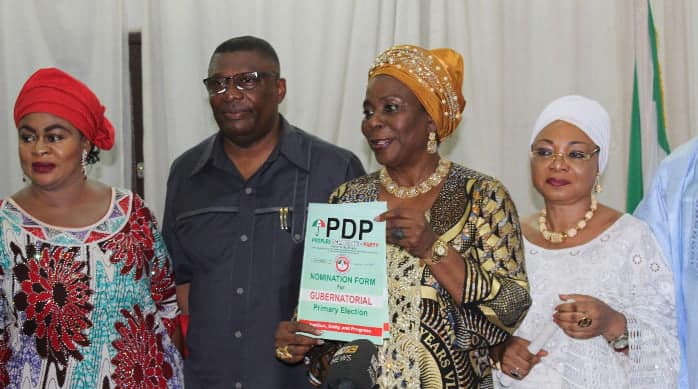 The Deputy Minority Whip of the Senate and the former Deputy Governor of Ekiti State Senator Biodun Olujimi, has declared her interest to vie for the governorship seat of Ekiti State under the umbrella of the People Democratic Party (PDP).

Olujimi who was accompanied by Sen. Stella Oduah and and several of her colleagues, officially submitted her nomination form at the headquarters of the Peoples’ Democratic Party (PDP), in Abuja.

Olujimi, Being the only female Principal Officer in the Nigeria Senate and the only female in the governorship race of the state, said that her candidature was for the people of Ekiti state, saying that moving forward, their concerns must always come first.

“Let me be clear, today’s submission of this form is not just an intent to run, it is an intent to serve. It is a message to the people, my people of Ekiti State that the time has come.

She Implored Nigerians to vote for leaders who are adding value to their lives. She added that Nigerians to always look at the track record of candidates and vote for issues, performance and track-records.

“My track-record speaks for itself,” the Deputy Minority Whip said,

“The Ekiti people know this and the members of my party know this. Now that I have submitted this form, it is time to hit the ground running. It is time to sell my vision for the future of the great state of Ekiti both to the people of Ekiti and my party members.”

Other Senators who accompanied Olujimi for the submission of her form include: Senators Attai Aidoko , Mohammed Hassan, and Matthew Uroghide.