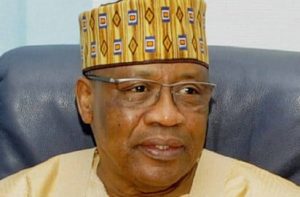 Former Military President, General Ibrahim Badamasi Babangida has called on the old generation to give up power and give the younger ones the opportunity to steer the affairs of the nation.

He said that the old generation has overstayed in the corridor of power and their ideas are becoming rusted. Speaking at his Uphill residence when he received the members of New Nigeria group, a new political movement led by its leader, Moses Siloko Siasia, Babangida said that the possibility of handing over the leadership of the nation to younger generation should not be overruled or overlooked.

According to him, the younger ones have the capability to steer the ship of the nation aright pointing out that the younger people have the passion and zeal to propel the nation to the path of development and growth.

“History has shown that a nation’s development fulcrum progresses better in the hands of younger generation is more adventurous and full of fresh ideas.

“some of us assumed leadership at a very young age. The older generation must give way for the new one. We have become analogue but this is a digital age; so the young people should be supported to use their digital knowledge to move the country forward and this must start from the grassroots which includes every local government in Nigeria.”

Speaking on the ‘Not too Young to Rule Bill’, the former military president said the youths should put their energy towards pushing for the realization of the Bill.

The leader of the delegation and Peoples Democratic Movement (PDM) candidate in the last governorship election in Bayelsa State said the group was in Minna to consult and seek the blessing of the former leader for a new Nigeria, a new ideology ahead of 2019. He said that the group would visit other former president Olusegun Obasanjo, Goodluck Jonathan and former head of state General Abdulsalam Abubakar for their support.