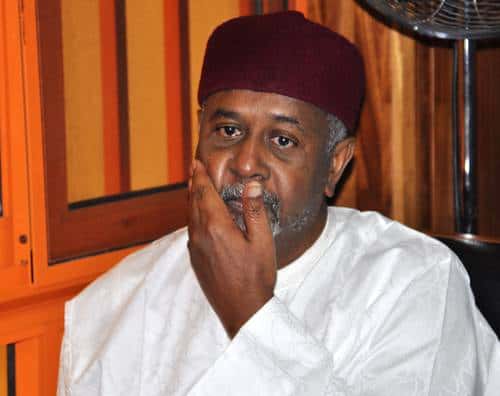 Justice Gabriel Kolawole of the Federal High Court, Abuja has berated the Economic and Financial crimes Commission (EFCC) over display of gross misconduct in the prosecution of an alleged N3.1B corruption case against Former National Security Adviser, Col Sambo Dasuki.

The Judge who accused the EFCC of frustrating proceedings in the trial and attempting to take over control of court withdrew from the EFCC case and returned its file to the Chief Judge of the Court, Justice Abdul Adamu Kafarati for re-assignment to another court.

The trial involving a serving Colonel in the Nigerian Army, Nicholas Ashinze and five others ran into storm during the cross examination of an EFCC operative, Mr. Hassan Sheidu.

Counsel to Army Officer, Mr. Ernest Nwoye had asked the EFCC operative who conducted investigation into the case to confirm to the court, if the name of Nicholas Ashinze appeared in any of the transactions relating to the N3.1B water project contract and which he answered negatively.

Nwoye also asked the EFCC witness to confirm to the court whether the contract was initiated by the office of the National Security Adviser where the Army Officer served or the Federal Ministry of Water Resources and which he answered in favor of the latter.

Trouble began when another question on whether the NSA office was responsible for payment of the contract and whether the office of Secretary to the Government of the Federation (SGF) and the Central Bank of Nigeria (CBN) which effected payment ever declared the water contract illegal or fraudulent and which he answered in the negative.

Nwoye then asked the EFCC witness to tell the court why the name of Nicholas Asinze was put on the charge sheet.

Counsel to EFCC Mr. Ofem Uket became uncomfortable with the cross examination and began interjecting into the proceedings persistently.

Efforts by the Judge and other lawyers that the cross examination be allowed unhindered were rebuffed as the counsel objected to virtually all the questions put to his witness.

In the face off that ensued, Justice Kolawole attempted to call EFCC to order but the effort yielded no fruitful result while other lawyers expressed bitterness on the issue.

The interjection got to the climax when the counsel openly challenged the court records which were severally read out to him by Judge to assuage his feelings.

However, when all effort to call the counsel to order to stop the interjection were rebuffed, Justice Kolawole informed the counsel to conduct himself in manners expected of a legal practitioner which still yet yielded no fruitful result.

At a point, the Judge said he could no longer condone the conduct of EFCC in the trial and announced his withdrawal from the case.

Justice Kolawole accused the anti-graft agency of frustrating his court and desperately seeking to take over control of the court from him against the normal practice.

He said that it was the duty of the court to allow a witness in a criminal trial to be cross examined with questions contemplated by law adding that the display of apprehension by EFCC was unjust and un-called for.

The Judge while lambasting the EFCC for taking the court, laws and the best practice for granted counseled the commission to always put its house in order before rushing to court for trial adding that Justice was not for a particular side.

He therefore opted out of the case and returned the file to the Chief Judge for re-assignment to another judge.

Justice Kolawole had on March 21, 2017 stopped the trial of the defendants in the case when the EFCC in a press statement quoted the court proceedings upside with claims that the defendants were indicted for N36B contract fraud and put on trial before the court.

The press statement which was widely published in the newspapers drew the anger of a Senior Advocate of Nigeria SAN, Mr. Paul Erokoro who insisted that the EFCC statement was capable of misleading the general public.

The senior lawyer drew the attention of the court to the 13 court charge against the defendants involving N3.1B and not N36B and demanded that the court call the EFCC to order in the media trial of the defendants.

EFCC counsel Mr. Ofem Uket had denied granting press interview but however admitted that the offending press statement emanated from the media unit of EFCC.

In his ruling then, Justice Kolawole condemned the EFCC for conducting two trial for the defendants in the media and his court.

The Judge said that it was wrong of the EFCC to have claimed that the defendants were indicted for N36B alleged fraud when such a bogus figure was not contained in the charge adding that such press statement will prejudice fair trial of the defendants.

The trial however, resumed when the offending newspaper publications were retracted by the EFCC and apologies tendered to the court.

Other defendants in the case are Sadiq Mohammed, a foreigner A.C Wolfang and a lawyer Mr. Edidion Edidion.