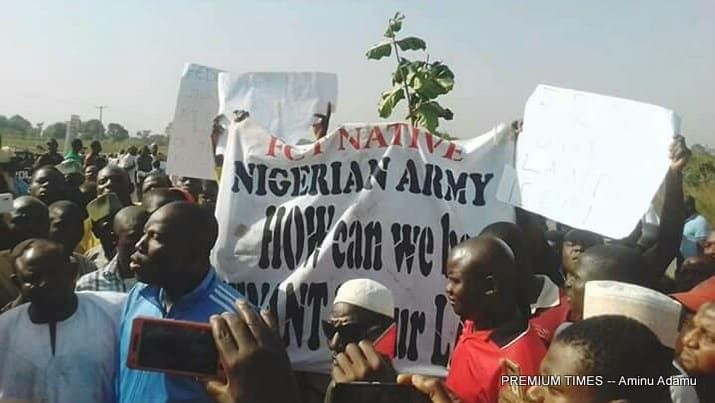 Protesters accuse govt of giving excessive land to the army.

Some protesters on Tuesday morning blocked the Zuba-Kaduna highway in Abuja to revolt alleged excessive granting of land to the Army in the Nigerian capital.

Naija News gathered that the protesters carried placards, halting movement of movement of traffic on the busy highway.

According to Premium Times report, the protesters said they are original indigenes of Abuja and that their farmlands had been given to the army without adequate compensation.

Naija News gathered that the vice chairman of Zuba council, Kasimu Muhammed and the Emir of Zuba, Bello Muhammad came to the scene of protest to address the natives appealing to them to not block the highway.

“The committee has been set up to discuss this issue. It includes the chief of army staff, the (FCT) Minister and the Emir of Zuba”, Muhammed said.

The Emir of Zuba said the army should be blamed if the protest degenerate into violence, adding that a committee was set up to resolve the matter.

Read also: Tinubu jets out with Buhari to Cote d’Ivoire for EU-AU summit

“I expect the Nigerian Army to be law abiding people. If there is any violence in the course of this protest by the youth, the Nigerian Army is to blame because the committee that was set up to deliberate on this matter includes the Chief of Army Staff himself. Resolution has not been reached yet but the Nigerian Army has started working on the land.

“We are not anti-development, if the federal government wants to cede the land to the Nigerian Army, let there be consultations so that the people are relocated and compensated adequately”, he said.

A former vice chairman of Zuba, Abdullahi Alhassan, said that it was during the Gen. Ibrahim Babangida’s regime that some portions of the land were relinquished to the Nigerian Army to build barracks for security purposes.

He added that since then, there has never been any official letter from the federal government to the indigenes giving the whole land to the Army.

The chairman, FCT Koro Youth Association, Adamu Isyaku, said the Army had taken over their land which covers areas from the FCT College of Education Zuba to Giri, Iddo and the airport road without necessary consultations.

“From FCT College of Education, Tunga-Mage to Giri and Iddo to Airport road all round. The Nigerian Army is taking over our land beqeathed to us by our forefathers without any reasons and consultations. We did not buy this land. We own it as fellow Nigerians have their own lands in other states and local governments.

He said the protests would continue until the army stop work on the land.

It was learnt that the protesters later dispersed after the address.

According to Premium Times, effort to speak with the defense spokesperson, Rabe Abubakar, proved abortive.