Evans made the allegation when detectives took him to one of the dens his gang used for the detention of victims.

The bungalow situated at Green Street, Jakande Estate, Isolo, was rented by the kingpin, through his gang members in 2010 and he paid the rent yearly.

The other two are situated at New Igando and Gowon Estate, the suspect said.

Evans, who said he believed his father must have started the pig husbandry from the money he gave him, blamed the man for what he turned into. 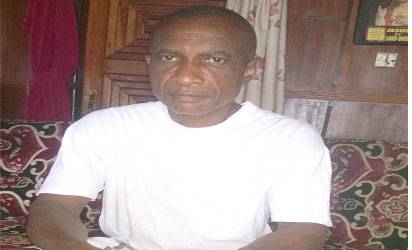 He said: “Before I stopped going home, I gave my father N3million and I bought him a jeep and pick up van. I believe that part of the money I gave him was what he used to establish the piggery business. Had it been my father had taken good care of me,  I wouldn’t have become what I am today.

“I dropped out of school at JSS2, when my father refused to send me to school. I have been fending for myself since I was 10 with the support of my mother, presently my mother is paralyzed. She’s on sick bed.

“My wife was only lying that she did not spend part of my money. She only wants Nigerians to have sympathy for me. She did not know I was into kidnapping.  I only told her that I am into drug, which she advised me to stop because it is dangerous.”

Related Topics:EvansEvans The Kidnapper
Up Next