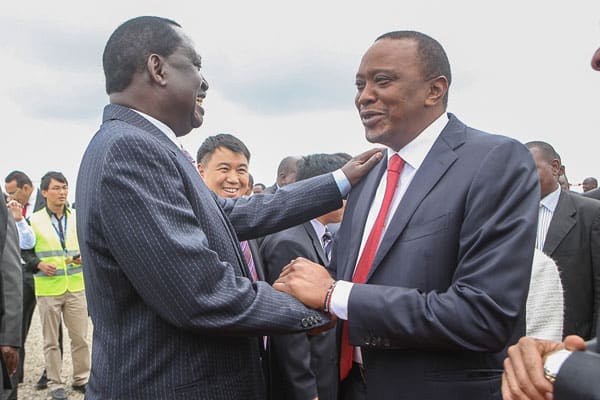 Kenya incumbent President Uhuru Kenyatta and top opposition leader Raila Odinga are the top candidates that will slug it out alongside seven others in Kenya’s August 8 Presidential elections.

The Independent Electoral and Boundaries Commission (IEBC) on Monday cleared the nine candidates and their running mates after they presented the required documents to contest.

However, five candidates failed to meet the requirement includes securing 2,000 signatures from people not affiliated to any party in at least 24 counties.

The Jubilee Party’s Uhuru Kenyatta and his running mate William Ruto hit the campaign trail immediately after their clearance as they paraded through the streets of Nairobi filled with thousands of supporters.

“We have no intention to abuse our opponents. Our desires is to sell the policies we have. Peace now, peace during campaigns and peace after the campaign,” Kenyatta said after he was cleared.

As Jubilee we appreciate your support and pledge to continue to work for everyone regardless of ethnicity, social-standing or creed. pic.twitter.com/HnJnzWYvsp

National Super Alliance candidate, Raila Odinga and his running mate Kalonzo Musyoka of the Wiper party presented their documents on Sunday and equally exhibited their candidacy to their supporters at a rally in the capital.

I thank God that Mama IdaOdinga is back in the country and will acompany skmusyoka and I as we hand our papers into IEBC today pic.twitter.com/OF8YaIlpq8

Campaigning officially started on Sunday, May 28 and will run to August 5, 3 days before the election, the IEBC announced.