Apostle Johnson Suleman, the founder of Omega Fire Ministries, has denied rumours in the media that he impregnated and abandoned his Canadian lover Stephanie Otobo in a Lagos hotel.

The fearless preacher who was recently in the news over the Fulani Herdsmen killings in northern Nigeria, was alleged to have met Stephanie Otobo in Nigeria in 2016, when she came into the country from her Canada base, and has since been involved in an illicit affair.

According to Naij.com, the man of God said he has never met the lady in person and does not even know what she looks like, whether tall or short.

“They said I did introduction, will I not meet with her family members if I did?” he began when our correspondent called him over the phone.

“The truth of the matter is that she was hired by some people who are unhappy about my ascendancy, to come from Canada for the blackmail.

“They paid her N1.5m to go ahead with the blackmail. She informed her friends about it and one of her friends told my church member. That was how someone was made to tail her and that was how she was arrested.

“Presently, she is in police custody and will be in prison tomorrow.

“The father has been begging me, but there is nothing I can do about it since the case is already being handled by the police,” Apostle Suleman stated over the phone. 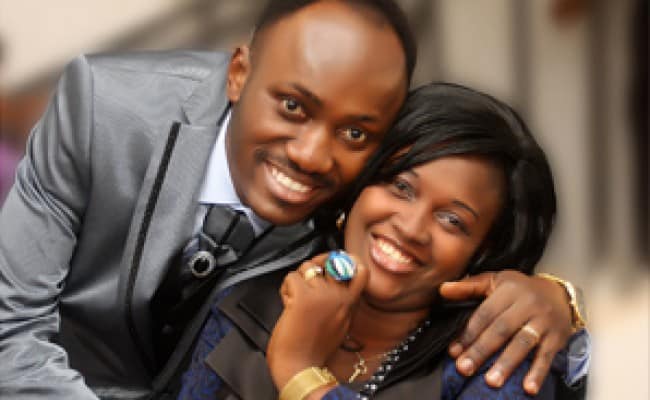 Apostle Johnson Suleman and his wife

On how he came in contact with the lady, he said: “She called me in 2016 that she was a prostitute and that she gave her life to Christ during my crusade in Canada. She said she needed help and I said ok.

“I spoke with my wife about her and she said there was no problem. I helped her and gave her money twice, then this happened.

“I am not giving ladies money again. I may give brothers, but not ladies anymore. Even if I give the brothers now, they may start calling me a homosexual. So, what do I do? Stop doing good?”