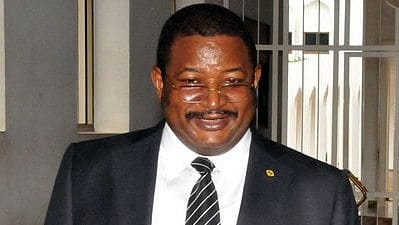 There are indications that Andrew Yakubu, the former group managing director of the Nigeria National Petroleum Corporation (NNPC) was planning to be Kaduna state governor in 2019.

Yakubu came into spotlight after the Economic and Financial Crimes Commission (EFCC) busted a building located at No.9, Kagarko Street, Ungwan Sunday, Sabo Tasha area of Kaduna belonging to him and recovered $9.8 million cash.

According to The Sun, there were speculation that he was planning to use the money to fund his campaign for governorship in Kaduna in 2019 and depose Governor Nasir El-Rufai.

It was reported that the former NNPC boss was in talks with the yet-to-b-registered mega party to contest on its platform.

A close associate of Yakubu who spoke on the condition of anonymity said contrary to speculation that he was gunning for the Senate, his real plan was the governorship seat.

“I am aware that he is eyeing the 2019 gubernatorial race of Kaduna State and not the senatorial race as some people are speculating.”

A senior staff at the NNPC said Yakubu had access to huge amount of money considering the position he held but said where he kept the money raised eyebrows.

A source said: “He was in Atlanta, USA, when he heard the news, but he flew back to the country and submitted himself to EFCC. In fact, within few days, he met all the bail conditions, but at the time I am speaking with you now, he has not been released by the EFCC. Maybe they will soon release him since he has met the bail conditions.”

The associate said: “All the persons involved will be fished out. However, I want to add that even if he has political ambition, why was he not generous to his neighbours. Of course, he may have been generous to some people, but in the wake of the discovery of the seized hard currency, majority of the people have said that he was not generous to them.”