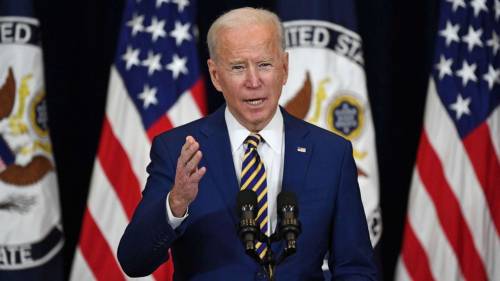 President Joe Biden has issued a presidential memorandum aimed at expanding protection of the rights of lesbian, gay, bisexual, transgender and queer, and intersex (LGBTQI) people worldwide, including potentially through the use of financial sanctions.

“The Departments of State, Justice, and Homeland Security shall ensure appropriate training is in place so that relevant Federal Government personnel and key partners can effectively identify and respond to the particular needs of LGBTQI+ refugees and asylum seekers, including by providing to them adequate assistance and ensuring that the Federal Government takes all appropriate steps, such as potential increased use of Embassy Priority-1 referrals, to identify and expedite resettlement of highly vulnerable persons with urgent protection needs,” Biden said.

Recall that Ex-President Goodluck Jonathan signed the Same-Sex Marriage (Prohibition) Act in January 2014, prescribing between 10 to 14 years in prison for cohabitation between same-sex sexual partners, public show of same-sex relationship, registration, operation or participation in gay clubs, societies and organisation, amongst others.

In a memo issued in February, Biden had threatened “swift and meaningful” responses, including financial sanctions against countries found guilty of human rights abuses of LGBTQI+ persons.

The memo read, “When foreign governments move to restrict the rights of LGBTQI+ persons or fail to enforce legal protections in place, thereby contributing to a climate of intolerance, agencies engaged abroad shall consider appropriate responses, including using the full range of diplomatic and assistance tools and, as appropriate, financial sanctions, visa restrictions, and other actions.”

“All human beings should be treated with respect and dignity and should be able to live without fear no matter who they are or whom they love,” said the memorandum, building on a 2011 directive issued when Biden was serving as vice president.

“The United States belongs at the forefront of this struggle – speaking out and standing strong for our most dearly held values.”

Biden campaigned on a pledge to pass LGBTQ rights legislation known as the Equality Act in the first 100 days of his administration and make LGBTQ rights a top priority.

The memo directs US agencies working abroad to work harder to combat the criminalisation by foreign governments of LGBTQ status or conduct and directs the State Department to include anti-LGBTQ violence, discrimination and laws in its annual human rights report.

It calls for increased efforts to ensure that LGBTQ asylum seekers have equal access to protection, expanded training for US federal personnel, and potential increased use of priority referrals to expedite vulnerable people’s resettlement.

It also instructs agencies to consider appropriate responses, including the full range of diplomatic tools and potentially financial sanctions and visa restrictions, when foreign governments restrict the rights of LGBTQ people.

Biden announced the push during a forceful speech at the State Department, vowing to rebuild US credibility worldwide.

“To further repair our moral leadership, I’m also issuing a presidential memo to agencies to reinvigorate our leadership on the LGBTQI issues and do it internationally,” he said.