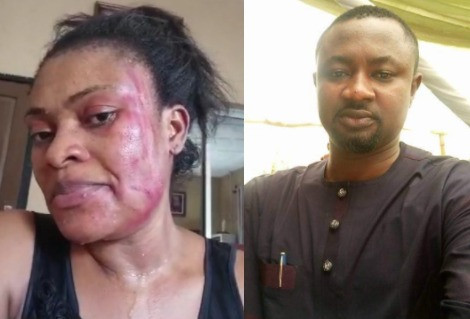 The social media, particularly Twitter, has been rocked with a video showing the wife of a Channels Television reporter, Ifeanyinwa Angbo, crying to the public for help over an alleged repeated assault by her husband, Pius Angbo.

The woman, a medical doctor, in two minutes, 13 seconds video seen by Naija News said she has been married to Mr. Angbo for six years but has never enjoyed her home.

She claimed that Mr. Angbo, a journalist and the correspondent of Channels Television in Imo State, often assaulted her over ‘petty’ arguments at home.

She said the latest assault was a result of her advice to her husband to cease spending lavishly on ladies and cater for his four children.

“Hello individuals, my identity is Ifeanyinwa. I’ve been married to this man, Pius Angbo of Channels Television for six years, and for six years, I’ve not identified peace in this marriage; it’s been from one girl to a different one. I simply had a child from a cesarean part nearly 4 weeks in the past.

“Just as a result of that I instructed him to spend correctly and never spend on ladies recklessly, contemplating that we’ve 4 kids and will likely be educated, that’s why I received this beating. (He tried) to strangle me and sat on my incision. The kids had been crying.

“When I was pregnant, at three months, he sat on my stomach, beat, and tried to strangle me. I thought I got married to a fellow human being, but you can see my face. It is well with my soul,” she said in the viral video.

While Mr Angbo is yet to react to the allegation, the management of Channels Television has said the company will look into the allegation and carry out necessary disciplinary action.

“Channels Television does not condone violence against women or anyone in general. The domestic violence matter reported against one of our reporters is being investigated and appropriate action will be taken,” the media outfit said on Twitter.