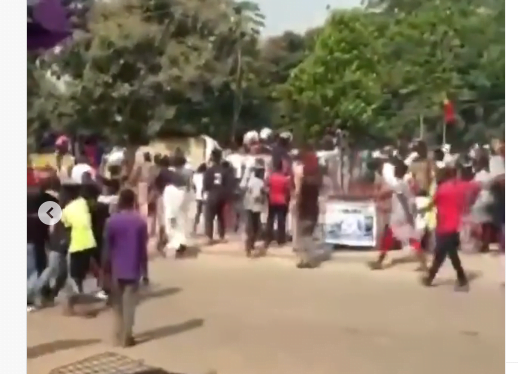 The National Youth Service Corps, NYSC, orientation camp in Kubwa, Abuja was on Tuesday, October 27 invaded by some persons alleged to be hoodlums.

Naija News reports that the individuals in their various ages stormed the orientation camp and do away with bags of rice, mattresses, and others

According to reports, residents in the neighbourhood also took advantage of the event and joined in the looting. It was gathered that the orientation camp was invaded at about 9 am on Tuesday, October 27.

An eyewitness confirmed that major roads leading to the camp were blocked by the suspected hoodlums who also ordered motorist to follow another route.

Watch moment items were cart-away from the orientation;

Meanwhile, a newborn baby has been found dead inside a partially fenced Church in Rivers State capital city, Port Harcourt.

Naija News understands that the lifeless child, dumped by a yet to be identified parent was wrapped in an Ankara material and kept somewhere in the Church located at Ozuoba junction, along NTA-Mgbuoba Road in Obio-Akpor local government area of the state.