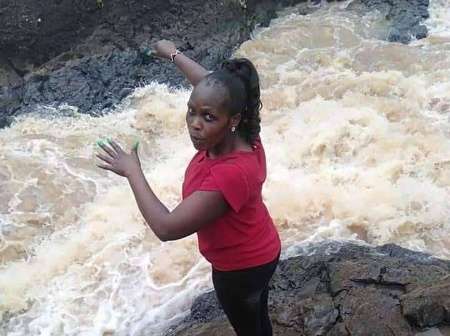 A Kenya lady, Dorcas Jepkemoi Chumba, has reportedly been swept away in a raging dam while taking photos with her lover whose name is revealed as Benjamin Kazungu.

Reports had it that the ‘love birds’ were having a photo session at the brim of the dam before the raging water seized the 31-year-old woman away at the watch of her fiance.

Naija News understands that the tragic incident happened on Sunday, August 30 at the Nandi Waterfalls in Kenya.

Chumba’s fiance, Kazungu reportedly tried to save his woman but all effort was fruitless as the raging waters had her swum into the deep.

“The dam was so full, I tried to rescue her but was not able to,” Kazungu noted while interviewed.

The lady’s family was said to have begged the county government to help in retrieving Chumba’s body in other to give her a befitting burial.

“The tragedy indeed took place and we have come to accept that Chumba is no more. We are, however, requesting for help to retrieve the body and give her a befitting send-off,” the deceased’s brother, Victor Kiptoo pleaded.

Responding to the request, Nandi County police boss, Samson ole Kina stated that it has been difficult to retrieve the body due to the raging floods.

He said, “This dam has become a dangerous place especially during the rainy season,”

The officer further warned residents to be extra careful and keep off from the dam.

Meanwhile, one Mr Anthony Edijala, 39, a resident in Delta has reportedly struck his woman with an axe after observing some changes on his manhood, Naija News reports.