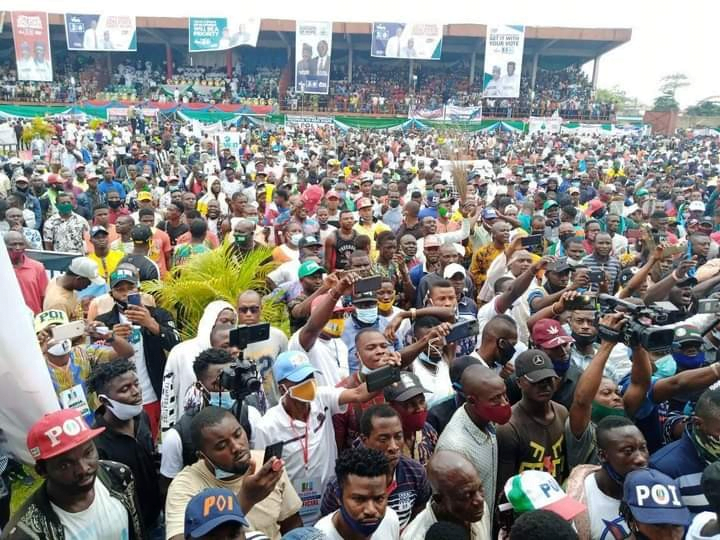 The All Progressives Congress (APC) has boasted that it will win the Edo State governorship election scheduled for September 19, 2020.

The party declared that the massive crowd that welcomed it at the formal flag-off of its campaign on Saturday is an assurance that the people of the state have chosen APC and its candidate, Pastor Osagie Ize-Iyamu.

This is contained in a press statement signed by Mr. John Mayaki Chairman, Edo State APC Media Campaign Council after the Saturday campaigns which held at the Sports Complex of the University of Benin, Ugbowo noting that victory is assured for the party.

As earlier reported by Naija News, many leaders of the APC including the deputy Senate President, Ovie Omo-Agege, the governors of Kano, Jigawa, Kebbi, Kaduna, Niger, Ogun, Osun, Ondo and Imo states were at the rally. The Governors of Kogi and Lagos sent their deputies.

Others included Minister of Transport, Rotimi Amaechi, Minister of State for Budget and Economic Planning, Prince Clem Agba, and his counterpart in the Steel Ministry, Uche Oga.

Governor Mai Mala Buni, the Chairman of the APC Caretaker Committee and Governor of Yobe State, led a delegation of other Governors and leaders of the party from across the country to the flag-off rally and assured voters that the party will reclaim the state at the polls.

Addressing party leaders and supporters, Governor Mai Mala Buni said the party is united behind Pastor Osagie Ize-Iyamu, while also assuring voters that the APC will reclaim Edo State in a peaceful election on the 19th of September.

On his part, the Chairman of the APC National Campaign Council and the Governor of Kano State, Umar Abdulahi Ganduje, said the party had begun on a victorious note with the successful inauguration of the excluded members of the Edo Assembly and urged voters to choose the APC at the polls for inclusive governance and return to growth and development.

In his remarks, Pastor Osagie Ize-Iyamu thanked all the leaders present at the rally. He said their presence, and the turn out of the people, are a testament to the fact that Edo State has chosen APC and will demonstrate this choice at the polls.