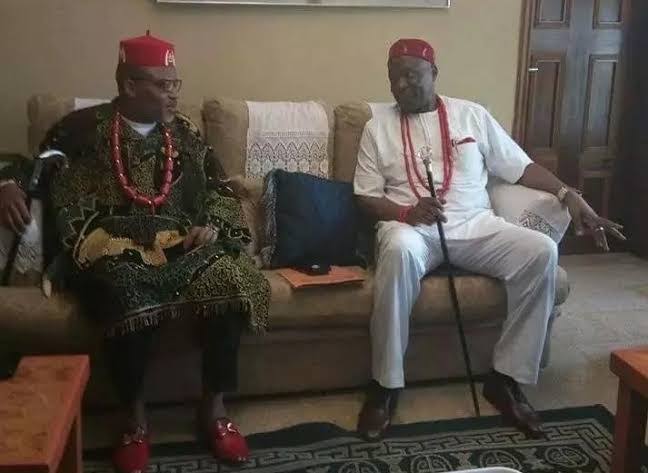 Naija News reports that IPOB leadership visited Ohanaeze Ndigbo National Executive Committee (NEC) on Tuesday at their monthly meeting, seeking the assistance of the apex Igbo socio-cultural group for the de-proscription of the group.

The decision of the IPOB was contained in a statement signed by the Special Adviser on Media & Publicity to President General, Chief Emeka Attamah. The statement said Benjamin Madubugwu, who led the IPOB group, said that they came in continuation of the rapport reached with Ohanaeze at the Anambra State reconciliation meeting.

Speaking further, Madubugwu noted that there is an Igbo proverb which says that no matter how much a warrior is derided, he is always sought after when there is an outbreak of war. Madubugwu continued that Chief Nwodo remains the undisputed leader of Ndigbo and expressed happiness with his fatherly disposition and fight for the Igbo in a country, he said Ndigbo were highly marginalised notwithstanding their contribution to the building of the Nigerian nation.

The IPOB leader said that the proscribed pro-Biafra group was not a terrorist organization, adding that it was just being given a bad name to hang it. He stressed that most of the actions of their master, Nnamdi Kanu, had been coloured by the information given to him which he said, were sometimes distorted.

Madubugwu assured Ohanaeze that Kanu was always available for discussions with Chief Nwodo on matters concerning the Igbo.

Also speaking, Barrister Ejimakor, another leader of IPOB,  said that Chief Nwodo has the clout and charisma to help IPOB out of its present predicament, adding that he was happy that the gap hitherto existing between IPOB and Ohanaeze Ndigbo had been bridged for a united voice for Ndigbo in Nigeria.

Responding, Chief Nwodo, who is the President-General of Ohanaeze Ndigbo, welcomed the IPOB leaders, reassuring them that he was always ready to accept his children back into the fold no matter their earlier recalcitrance.

The President-General of Ohanaeze Ndigbo recalled all efforts he had made to establish an amicable and complementary relationship with IPOB since assuming office but were frustrated by the IPOB leader, Mazi Nnamdi Kanu.

Nwodo said Ohanaeze Ndigbo had no quarrel with Mazi Nnamdi Kanu and that he believed that whatever evil machinations of detractors has come to nought with the recent rapprochement between the two groups.

the President General of Ohanaeze Ndigbo prayed that this latest development should be the opening of the door for mutual cooperation between IPOB and Ohanaeze Ndigbo, and urged IPOB to also share views with Mr Tony Nnadi whom he said was working towards the same objective as IPOB. The President General called on Mazi Kanu to change his tactics of abuse and belligerence as a step towards building bridges for Ndigbo in the country.

Chief Nwodo reiterated that both IPOB and Ohanaeze Ndigbo share in the same cause of fighting to emancipate Ndigbo and give them a lease of life and sense of fairness in the country but differ in the methodology or approach towards the realization of the objective.

Nwodo continued that Ohanaeze Ndigbo still believes in dialogue and the restructuring of the country for an inclusive participation in the Nigeria project.

Meanwhile, the IPOB was labelled a terrorist group by the Federal Government led by President Muhammadu Buhari and a Federal High Court on 18th September 2017 proscribed it. The pro-Biafra fought against the proscription and sought to reverse the court’s decision in 2018.